How Koforidua ushered in new year 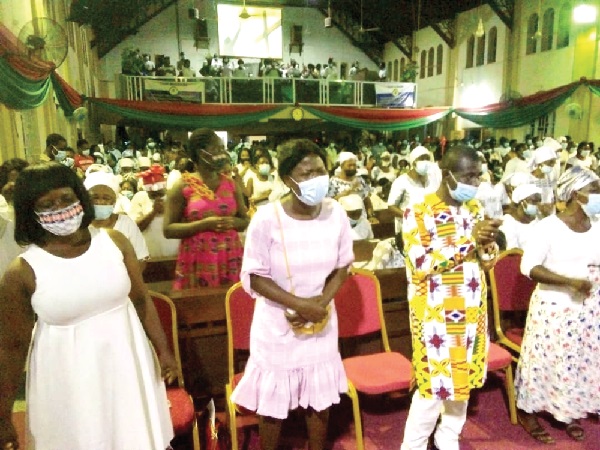 Some worshippers praying for God’s blessings as they welcomed the new year at the Methodist Church
30.5k Shares

Churches in the Koforidua township burst at the seams as worshippers trooped in both on Christmas Day and on the night of December 31, 2021 to usher in the new year.

The worshippers, who were clad in white clothes, sang and praised God for seeing them through the past year and making them see the new year.

As dawn broke on January 1, 2022, expectant mothers at the Eastern Regional Hospital were also delivered of 15 babies, bringing to 30, babies born on both Christmas Day and the new year.

At the Anglican Church, the Bishop of the Diocese, the Rt Rev. Felix Odei Annancy, asked Ghanaians to be obedient to God and do exactly what God expected of them before they could get their blessings.

Rt Rev. Annancy said as "we move into the new year, Ghanaians must forgive one another and forge ahead in unity for peaceful coexistence with members of the other faiths."

At the Presbyterian Church, the Koforidua District Minister, Rev. Dr Kofi Amfo-Akonnor, said God had a purpose for Ghanaians and ,therefore, the people must worship and praise God for taking them through the previous year.

According to him, it was in God's own wisdom for Ghana to have a hung Parliament, as such Ghanaians must listen to the voice of God in the happenings of Parliament.

He asked Ghanaians to pray to God because it was not going to be easy.

Rev. Dr Amfo-Akonnor said with God and Jesus, Ghanaians would be taken through the difficulties in the new year.

When the Daily Graphic visited the Methodist Church, the Bishop of the Diocese, the Rt Rev. Dr Emmanuel Kwadwo Asare Kusi, called for reconciliation, particularly among the various political parties to move the society and the country forward.

The Rt Rev. Dr Kusi who also spoke on the theme; "Transformation" said Ghanaians should transform themselves inwardly to reflect on society.

The Pastor in charge of the Assemblies of God, the Omega House Chapel International, Rev. Albert Asihene –Arjarquah, told a large number of worshippers gathered at the Jubilee Park that church members, as well as Ghanaians in general had to work hard during the new year.

The babies delivered at the Eastern Regional Hospital in Koforidua during the yuletide and the new year day comprised 11 males and 19 females.

In all, there were 23 normal deliveries and seven births through caesarean.

The Senior Staff Midwife in charge of Shift at the Labour Ward, Mrs Hannah Yeboah, said most women who delivered on festive occasions considered that to be a blessing.

A new mother, Mrs Gifty Fiagbedzi, expressed her joy that she had delivered on new year’s day, which to her was a blessing and hoped the baby would grow to be a responsible adult.