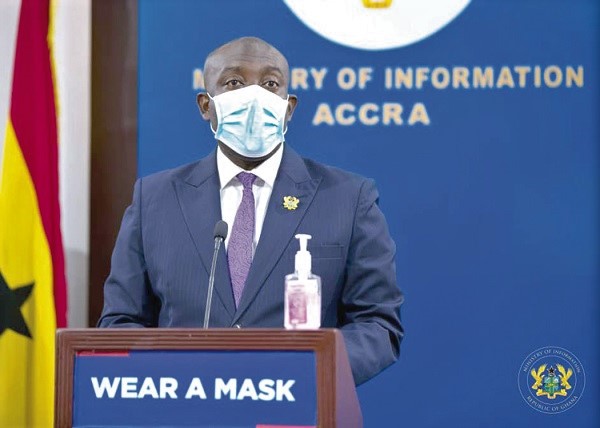 The Minister of Information, Mr Kojo Oppong Nkrumah, has said the government is engaging the Ghana Police Service to fine-tune the enforcement of a new law which aims to curb the spread of COVID-19 by making the wearing of nose mask mandatory.

Reacting to concerns about the enforcement of Executive Instrument (E.I.) 164 for individuals riding alone in their private vehicles, Mr Oppong Nkrumah said the government preferred a “purposive interpretation” rather than a “literalist interpretation”.

This means that the law would be interpreted to achieve the rationale (purpose) for which it was introduced, and not based on just the words used.

The Information Minister also stressed that the objective of E.I. 164 was to curb the spread of the coronavirus disease (COVID-19) by compelling all persons within public places, and who were in contact with others, to wear a face covering.

"The lawyers will tell you that there are those who do what they call the literalist interpretation and there are those that do the purposive interpretation. Today, the courts even use what we call the modern-purposive approach,” Mr Oppong Nkrumah said in Accra yesterday at the Ministers’ Briefing to provide update on the fight against COVID-19.

"What government is doing is that we are engaging with the police to give the E.I. a purposive interpretation when they are applying it and as I mentioned, the purpose or the objective is to compel all persons within public places and in contact with others to wear nose mask so that we can curb the rate of transmission and so, the engagements have started with the police so that they can give it a more purposive approach,” the minister emphasised.

Providing an update on the country's COVID-19 case count as of June 22, the Director-General of the Ghana Health Service (GHS), Dr Patrick Kuma-Aboagye, disclosed that the country had recorded 14,568 positive cases out of 277,550 persons tested. This translates into a test positivity rate of 5.25 per cent.

He said the country currently had 3,566 active cases out of which 24 cases were severe and six were critical, with five persons on ventilators.

The death toll had also risen to 95 after the GHS recorded 10 new COVID-19 related deaths, he said.

“We have so far, following the review, recorded 95 deaths. Currently, we have 24 severe cases across the country and six cases are critical and five persons are currently on ventilators,” he said.

“We have a total of 414 new cases reported from 25 districts across the country and three regions. What is good is that about 13 regions did not record any new case yesterday,” Dr Kuma-Aboagye added.

Dr Kuma-Aboagye also stated that Ghana had recorded a cumulative total of 10,907 recoveries, a recovery rate of 75 per cent.

He further disclosed that the Northern Region (61 cases), Upper West (35 cases) and Savannah (37 cases) regions had 100 per cent recovery rates.

A member of the Ghana COVID-19 Response Management Team, Dr Oliver Adjetey Commey, explaining the science behind the revision of Ghana's COVID-19 Discharge Policy, said the country was now depending on “clinical recoveries instead of laboratory recoveries” to discharge patients.

He said the team was confident that asymptomatic persons could not infect another person 14 days after they first tested positive and had received treatment.

"Once the person tests positive, asymptomatic after 14 days we are confident that this person should go home and would not affect another person," Dr Commey explained.

"Remember we have said recovery is when you are sick and you have recovered from the illness, we are now depending on clinical recovery as against laboratory recovery,” he added.

Dr Commey said the team had realised that with PCR which tested for COVID-19 cases, the virus could persist for up to 80 days, but it did not mean that the person was still infectious.