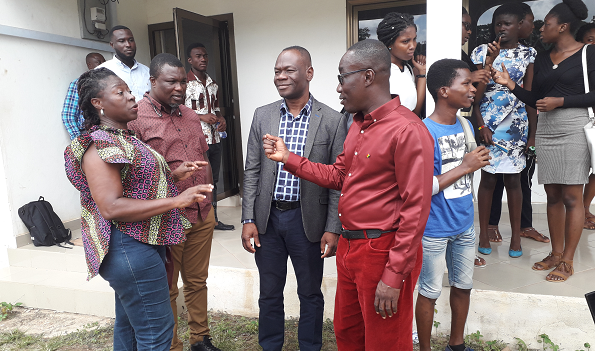 said the NBA, which is the regulator of the biotechnology industry in Ghana, had put in place the necessary structures to ensure that GMO products that would be released on a commercial basis onto the market were safe for consumption.

"We are ready for any promoter or commercial organisation of biotechnology product that wants to release GMO foods. We have strengthened our capacity to effectively regulate and conduct assessment of the product to ensure it is safe for consumption," he added.

Dr Okoree made the announcement when he engaged some agricultural students and other stakeholders at a forum dubbed “#AskAboutGMOs" in Accra yesterday.

The forum was organised by the Alliance for Science Ghana and the NBA.

Two main GMO crops — Nitrogen Use Efficient, Water Use Efficient and Salt Tolerant (NEWEST) rice and Bacillus (BT) cowpea — are currently being researched into and cultivated under confinement by the CSIR in Ghana.

Dr Okoree, however, cautioned that any commercial entity which did not follow the legal procedures to import or introduce GMOs onto the Ghanaian market would suffer the consequences or be fined between 2,500 and 5,000 penalty units or a prison term of five to 10 years.

Dr Okoree said currently the authority had granted permits to only two bodies to conduct research into GMOs in the country but was yet to grant a permit for the release of GMO products on a commercial basis into Ghana.

Allaying the fears of farmers about not being able to replant their seeds, as they did with conventional seeds, Dr Okoree said the seeds being piloted currently in Ghana were using the conventional means of breeding crops.

An executive member of the Alliance for Science Ghana, Ms Sylvia Tettey, said scientists around the world had indicated that GMOs were safe.

"It is a crucial tool to revolutionise Ghana's agricultural sector. We must not allow this opportunity to increase the negative impact of climate change slip by," she said.

A Senior Scientist at the CSIR, who is also the National Coordinator for the Open Forum on Agricultural Biotechnology, Dr Richard Ampadu Ameyaw, said the CSIR had, in the past five years, been developing and researching on the BT cowpeas and a variety of rice, both GMOs.

He confirmed that Ghana was ready to introduce GMOs onto the market and that the necessary processes were being put in place.
So far, he said, data had been collected on the BT cowpea which had been on a confined trial basis and taken to the African Agriculture Technology Foundation (ATTF) in Kenya, the institution which is sponsoring the development of the cowpea in Ghana, to ensure that it was safe.

He said the ATTF would assess the data to find out if the product conformed to the accreditation obtained from the NBA before a decision would be taken on its introduction on the market for consumption.

Dr Ameyaw added that the decision would be taken by a technical committee that would be set up as part of the process of releasing the new cowpea seed onto the market.

The President of the National Farmers Award Winners Association, Mr Davies Korboe, called for a national dialogue on GMOs for a decision to be taken on the way forward.

"People lack information on GMOs and they need more so that they can make the best decision when they are properly educated," he said.