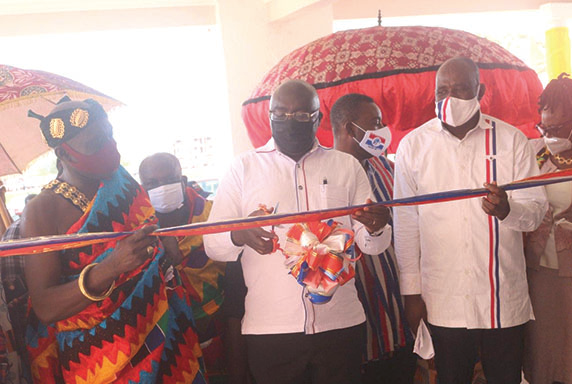 Dr Bawumia (middle) cutting the tape to inaugurate the new boys’ dormitory for the Nkenkansu SHS in the Offinso North District in the Ashanti Region. With him are Mr Collins Ntim (right), the MP for Offinso North, and Dr Nana Kwaku Duah (in Kente), the Offinso Nifahene. Pictures: EMMANUEL BAAH
30.5k Shares

The Vice-President, Dr Mahamudu Bawumia, has inaugurated five projects at the Nkenkansu Senior High School (SHS) in the Offinso North District in the Ashanti Region to boost teaching and learning in the school.

The projects, which were undertaken by the government, included two dormitories for boys and girls, a classroom block with offices and two three-bedroom bungalows for the headmaster and his assistant.

On the last day of his four-day tour of the region last Wednesday, the Vice-President also inspected an ongoing electrification project for the school.

Still in Nkenkansu, Dr Bawumia inaugurated a four-storey office complex for the Offinso North District Assembly and, in addition, inspected ongoing construction works on an office for the National Health Insurance Scheme at Akomadan in the same district.

From Akomadan, he travelled to Asawase in Kumasi to cut the sod for the construction of a mosque he is personally financing and attended a number of durbars held in his honour on the final day of the tour.

At the Suame Magazine in Kumasi, where Dr Bawumia attended a durbar held in his honour, the convoy of vehicles in which he was travelling was brought to a stop, as he was mobbed by traders and spare parts dealers who cheered him along the route.

Dr Bawumia told party faithful later on at the durbar, organised by the Majority Leader and Member of Parliament (MP) for Suame, Mr Osei Kyei-Mensah-Bonsu, that this year's elections were about the expression of ideas, not war.

He said what mattered was for NPP supporters to go out in their numbers and vote to retain President Nana Addo Dankwa Akufo-Addo in power as their show of gratitude for the brilliant way in which he had managed the country.

The Vice-President said there was no better way to ease the pain of the ordinary Ghanaian than to provide free water and electricity, on which the President needed to be congratulated.

He said in as much as victory in the upcoming elections was certain, there was the need for the party’s supporters not to get complacent but continue to work harder until victory was won.