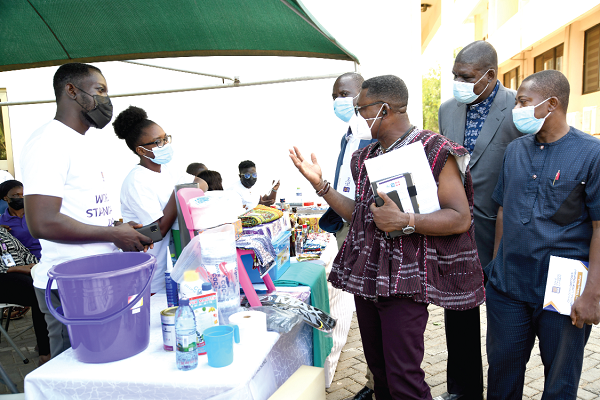 Prof. Felix Charles Mills Robertson (3rd from right), Board Chairman of the GSA, and some dignitaries inspecting items on exhibition at the event. Picture: EBOW HANSON

The Ghana Standards Authority (GSA) has been urged to forge a closer partnership with manufacturers and industry players to improve the standard of goods produced in the country.

A Deputy Minister of Trade and Industry, Mr Michael Okyere Baafi, who made the call, said Ghana could not measure its success or otherwise without an internationally recognised benchmark applicable to all countries, developed or developing.

He added that without conformity to international standards, the speed of change and innovation required to unlock the country’s economic development potential might not be attained.

Mr Baafi was speaking at a flag-raising ceremony to commemorate this year’s World Standards Day in Accra last Thursday.

It was on the theme: “Standards for the Sustainable Development Goals (SDGs): Shared vision for a better world’’.

The event was also used to raise awareness among regulators, industry players and consumers of the importance of standardisation to the global economy.

The deputy minister pledged the government’s support for the GSA in its effort to commercialise its services to promote standardisation and the growth of industry.

“I am happy this commemoration is happening at the time the GSA is re-tooling and repositioning itself in the sub-region and Africa as a customer-focused, world-class organisation with a mission to contribute to the growth of industry, consumer protection and trade facilitation through standardisation, metrology and conformity assessment,” he said.

According to Mr Baafi, standards provided an equitable shield for human security and minimised risk in all spheres of endeavour, adding that without it, there would be no means of ensuring standards for the production of goods and services.

The Director-General of the GSA, Prof. Alex Dodoo, said the authority had, over the years, played a key role in promoting rapid industrialisation through the development of relevant standards and conformity assessment activities, such as inspection, testing and certification.

He said the authority had also begun engagement with informal sector players, especially master craftsmen, to help them formalise their businesses through training and conformity assessment activities that would prepare them for the international market.

“The GSA is keen to formalise the work of master craftsmen for them to begin fabrication which is precise and quality,” he added

He said so far, the GSA had engaged with the National Development Planning Commission, the Commission for TVET and the Design and Technology Institute to train and equip the youth with quality skills for job creation.