Robofest Champions call on US Ambassador 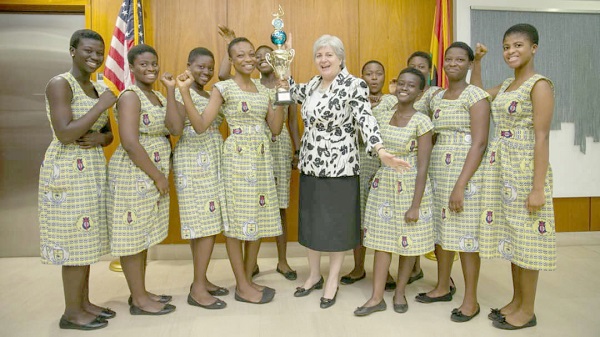 The 2019 Robofest Champions from the Methodist Girls’ Senior High School at Mamfe presenting the trophy to Ambassador Stephanie S. Sullivan

The US Ambassador to Ghana, Ambassador Stephanie S. Sullivan, has commended the 2019 Robofest Champions, the Methodist Girls’ Senior High School at Mamfe, for emerging winners of the 2019 ROBOFEST held in Michigan, USA.

She was delighted by the outstanding performances of the Ghanaian teams at the competition.

Ambassador Sullivan made the commendation when the team paid a courtesy call on her to inform the embassy of their outstanding performance at the Championship.

The visit was also to express gratitude to the ambassador and the staff of the embassy for the immense support of the activities of the Ghana Robotics Academy Foundation (GRAF) in the past eight years.

Ms Sullivan interacted with the students, answering questions on educational opportunities and scholarships in the US.

She encouraged them to continue working hard and raising high the flag of Ghana.

The teams presented their trophies to her, after which she posed for photographs with the delegation.

At this year’s Robofest World Championship, Ghana was represented in the senior category by two teams (ACROBOT and I-BOT), both from the Methodist Girls’ Senior High School, Mamfe, and in the junior category by Cosmic Intellect, a private team from the Mikrostem Academy.

Ms Sullivan was particularly delighted that the team was made up of all girls, saying “the success of an all-girls team is very inspiring”.

She pledged that the embassy would continue to support STEM in the country.

The team, which was led by Dr Yaw Okraku-Yirenyki, a member of the GRAF, expressed gratitude to the embassy for the interest shown in robotics in the country.

Team ACROBOT emerged as the overall winner in the senior category with an average score of 83 per cent out of 25 teams from many different countries.

The GRAF was founded by Dr Ashitey Trebi-Ollennu in 2011 as a non-for-profit organisation dedicated to motivating and inspiring the next generation of Ghanaians to have an interest and participate in STEM.