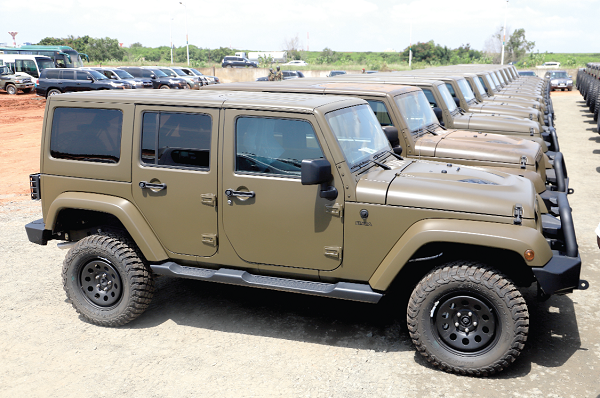 The vehicles are made up of 40 Jeep JH, six Toyota Hiace mini buses and 14 Toyota Hilux pick-ups.

He has also cut the sod for the construction of a $24.8-million, four-unit 80-block housing project for the GAF at the Burma Camp, the Naval Base in Sekondi, the Air Force Base in Tamale, the Fourth Infantry in Kumasi and the Third Infantry Battalion in Sunyani.

The President, who carried out both events at the Burma Camp in Accra yesterday, explained that the retooling programme was also to support the GAF to deal with internal security challenges.

The projects include a cadet mess, a square and lecture rooms, which have all been completed, and an administration block, a 246-capacity Cadet Hospital, a Platoon commanders’ block and a GH¢33-million seven-storey Army Headquarters building, which are at various stages of completion.

President Akufo-Addo said the government would continue to respond to the needs of the GAF, saying “as your Commander-in-Chief, I am taking steps to ensure that your challenges are addressed”.

He said following the continued threat to security at the northern borders and the effort to ensure harmony in the country, the government decided to embark on the retooling, reconstruction and upgrading of equipment and facilities at the various military units and barracks to enhance the GAF’s state of preparedness.

He called for further collaboration among the military, ministries and agencies to protect the country against any form of aggression that would derail the political, social and economic gains the nation had chalked up over the years.

The President commended personnel of the security agencies for their vigilance, commitment and sacrifice, in the face of the modest resources they were working with.

The Minister of Defence, Mr Dominic Nitiwul, expressed appreciation to the President for his commitment to modernise the GAF.

He said there was no doubt that the vehicles would complement efforts by the GAF to conduct both their internal and external duties efficiently to sustain the prevailing peace in the country.