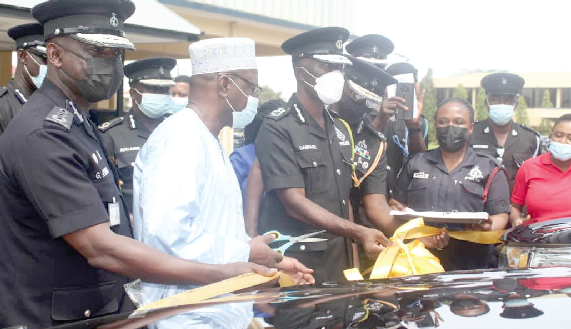 Alhaji Ibrahim Zakari (2nd from left) assisting Dr. George Akuffo Dampare to cut a ribbon before handing over the vehicles

The vehicles, worth GH¢566,432, are to facilitate the movement of police personnel in their operations.

At a brief ceremony to hand over the two vehicles to the police, the Chief Executive (CEO) of Pacific Ghana Oil Limited, Alhaji Ibrahim Zakari, said the objective of the support was to enhance the operations of the service which, he said, had been "working around the clock to protect lives and property across the country."

He said he was optimistic that the vehicles would assist the police in combating crime.

Alhaji Zakari said as part of the company’s corporate social responsibility, it carried out an annual programme of identifying the needs of society and supporting same.

In the past, he said, the company had carried out a number of initiatives, including donating personal protective equipment to communities and supporting the vulnerable in a number of communities.

The CEO of Pacific Ghana Oil said this year, the radar of the company fell on the GPS, hence the presentation of the vehicles.

Over the years, “the police have done their best to ensure security by fighting crime”.

The Inspector General of Police (IGP), Dr. George Akuffo Dampare, who received the vehicles on behalf of the police service, said the vehicles would help the police to be more effective in their efforts to fight crime.

He commended the company for the kind gesture, saying “government alone cannot do it. We need the support of the public.”

The IGP said the two pick-up trucks would add up to the fleet of the service and would be used to ensure effective policing.

He assured the public of the continued commitment of the service in ensuring security in the country.