Ghana Railways : Broker of independence, mother of all companies 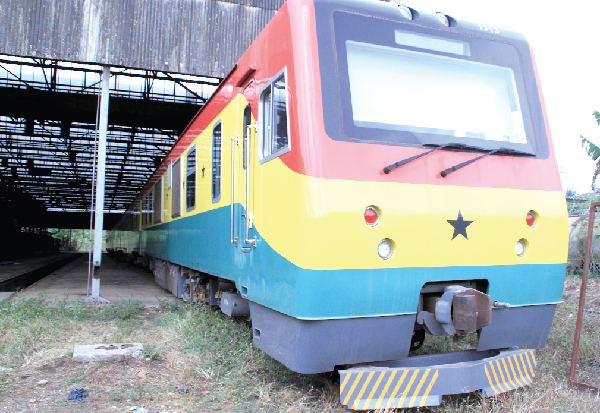 One of the two modern trains running the Sekondi-Takoradi route under a shed at the railway yard in Sekondi
30.5k Shares

Ghana Railways made immeasurable contribution towards the attainment of the country’s independence in 1957.

It also contributed to the creation of a nation and an economy backed by the rail sector 64 years ago.

The idea to establish a railways sector in 1895 and port in the late 1920s made the Ghana Railways Corporation become the first corporate institution in the then Gold Coast, which gave birth to several other companies.

In spite of its part in the fight for independence and pioneering role in birthing many companies in the country, Ghana Railways is a pale shadow of itself and a former senior management staff of the then Ghana Railways Corporation has lamented the current poor state of the company.

The retired worker and former Head of Corporate Affairs, Mr Abaka Amoah, holds a strong view that railway workers and the company practically created and controlled every facet of the country’s economy before, during and after independence.

Those who crown kings

He, however, lamented that after independence and the creation of the nation’s economy using railways 64 years on, the company (railways) was now in an impoverished state struggling to maintain its glory, even though it has more potentials than before.

This, he said, goes to confirm the saying that “those who crown kings don’t usually look like kings”.

The then railways corporation with all the companies it birthed and a well-motivated and well-paid staff with very strong unions became a vital tool for negotiating independence after the country’s first President, Dr Kwame Nkrumah, declared what is known as “Independence Now.”

The companies under the railways, Mr Amoah said, were responsible for running the economy and “at Sekondi, there was the first power generating unit that supplied power to the bungalows and various key administrative offices”.

He explained that later there was the need to extend power, water and postal services to the communities, therefore, there was the need to create those departments separately under the railways’ control to enable it satisfy the growing demands and “today we have ECG, Ghana Water, Post Office, banks and many others – they all came from us.”

Through the railways again the idea was mooted to construct a port instead of the use of a jetty in Sekondi. He said the site for the harbour location was proposed as the Amanful village, after which the construction of the port of Takoradi began in 1921 spearheaded by the then governor of the Gold Coast, Sir Gordon Guggisberg and was completed in 1928.

The railways and port by all standards, he said, were dominant organisations and responsible for everything that makes the country run, from the movement of goods – cocoa, timber among others to the port for onward shipment and income generation.

“Again, we moved the supplies that arrived in the country to the chain stores, from the mail ship to the mail rail – both internally and externally. At the time the only way expatriates could communicate was by mail and the telegraph, and these were controlled by Ghanaian workers,” he said.

Therefore, through the strong posture of the railways workers who had already bought into the ideals of Dr Kwame Nkrumah, they (workers) supported him to ensure that the country attained independence.

One of the indomitable elements of the unions and great supporters of the independence movement was the “Railways Engine-Men Union” with membership of the men who were in charge of the movement of the locomotives and the Railways Workers Union, who came together to prosecute the “Independence Now” agenda.

With one accord to support the call for independence, Mr Amoah said both the Railways Engine-Men Union and workers union teamed up and ensured that nothing worked – the locomotives didn’t move and other services including the port services didn’t work.

“During that strike, ships were not allowed in or out of the Port of Takoradi, nothing was exported, no import of goods and other critically needed components for mining, timber and cocoa haulage, which eventually crippled the economy,” he said.

“It was a very strong union, at the time, there were no roads linking cities as we have today, the colonial masters travelled on horseback and if they wanted to reach Takoradi, now the Western Region, they travelled by sea from Accra,” he said.

With the posture of the railways’ workers at the time, he said it was obvious that independence was at hand, the fever was in the air. To the extent that, during the Christiansborg shooting incident, the leaders of the Railways Engine-Men and Railway Workers Union again declared strike in solidarity.

“We as railway workers and our unions were happy that our actions succeeded in forcing the oppressors to give up and eventually leading to independence in 1957. Even after independence, Dr Kwame Nkrumah did not abandon us; he was still using the railways to consolidate the independence through the demands we made,” he said.

“To be honest with you, before and after we moved from Gold Coast to Ghana – the railways workers were the best paid, the organisation was the most profitable and strong force around which the entire economy was built,” Mr Amoah said.

He recalled that due to the high profit from the operations of the railways and port, after the expenses paid, “We posted huge profits to the extent that the country did not have to go borrowing – we supported the economy with our huge surplus income.”

“Before the independence, Railways Corporation was everything – there was nothing like government agencies, departments, ministries, insurance and Ghanaian banks among others as it is today,” he said.

He said during the heyday of the railways corporation as a profitable entity, the British brought to the Gold Coast, Barclays and Standard Bank of West Africa (SBWA) to control our finances due to the huge incomes and surpluses.

A train workshop at the Sekondi train yard

After the country Ghana emerged, Dr Kwame Nkrumah established the then Ghana Commercial Bank now (GCB Bank) with the Railways money and when the country took shape, he decreed that all state organisations must save with the GCB Bank to make it viable.

Today’s GCB Bank started in 1953 as the bank of the Gold Coast tasked to provide banking services to the emerging nation for socio-economic development.

The main focus was to serve the country’s traders, business people and farmers who could not elicit support from the expatriate banks, and in 1957, after independence, the Bank of Ghana was established as the Central Bank, while the Bank of the Gold Coast was renamed Ghana Commercial Bank to focus solely on commercial banking services.

Reminiscing the profitable days of the Railways Corporation, Mr Amoah said it was sad that a blue-chip company such as railways, ‘pregnant’ with success and which gave birth to every entity and opened doors for private establishments has been left to its fate.

“We gave birth to all these companies and supported through our unions for the attainment of independence but we have been forced to crash-land as we struggle to survive. Gone are the days when every haulage was by rail, but today private interest has taken over,” he said.

He said it was sad that during the Gold Coast days and early days of Ghana, roads were short linking towns to rail stations – these short roads lasted long, but today, a road constructed to last 30 years deteriorates within three to four years.

He appealed to the government to revisit the success stories of the railway sector, get the lines in shape; ensure heavy haulage is done by rail and the railways would work again.

“Let me appeal to our traditional rulers, when the political class visits during campaigns – please don’t ask for roads, ask for the revamping of the rail sector.”