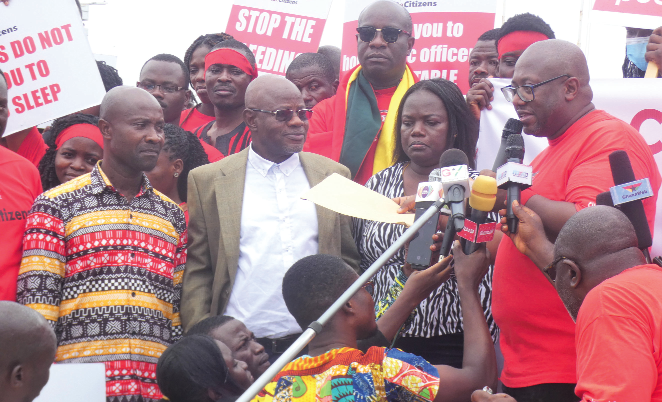 The Coalition for Democratic Accountability and Inclusive Governance on Monday, September 5, 2022 went on a protest march to compel the Auditor-General to exercise his powers of surcharge.

The group, also known as the Citizens’ Coalition and made up of civil society organisations (CSOs) and some individuals, also presented a petition to the Ghana Audit Service after its protest.

The submission of the petition climaxed the peaceful protest within the Ministries enclave in Accra, after a mini rally that was addressed by some leaders of the group.

The protest was led by the Director of Advocacy & Policy Engagement for the Centre for Democratic Development-GHANA, Dr Kojo Asante, and the Leader of Act Africa, Abdul-Karim Mohammed.

Also at the forefront was the Co-Chair of the Citizens' Movement against Corruption (CMaC), Edem Senani.

Their main concern was for the Auditor-General, Johnson Akuamoah Asiedu, to exercise his powers under the Constitution to issue surcharges and disallowances against persons cited for various financial irregularities in the 2019, 2020 and 2021 Auditor-General's reports.

Organisers had expected a high turnout, but attendance was affected bythe intermittent drizzles. Those who turned up for the protest, mostly clad in red, black and white outfits, held placards with inscriptions that sought to portray some of the issues they felt the Audit Service had to pay attention to.

They had converged in front of the Efua Sutherland Children’s Park, from where they marched through the road leading to the National Theatre to the Law Court Complex and then the Independence Square, where they presented their petition to the Audit Service.

The police coordinated with the leaders of the demonstration to direct both the protesters and vehicular traffic.

Regardless of the peaceful nature of the protest, riot police, clothed in full gear, were stationed at various points throughout the march.

Addressing the protesters, Dr Asante said he believed that the Auditor-General’s failure to prosecute irregularities discovered in the reports of the years under review emboldened public officials to continue causing financial loss to the State.

“If we are going to stop ourselves from going to the IMF every four or eight years, we need to take accountability seriously,” he emphasised.

He, therefore, called on the Auditor-General to exercise his constitutional mandate of disallowing and surcharging such irregularities, as well as enforce his asset declaration powers.

He commended the police for their professionalism with regard to coordinating the protest.

The Deputy Auditor-General in charge of the Performance and Special Audits Department (PSAD), Lawrence Ndaago Ayagiba, who received the petition on behalf of the Audit Service, said the service shared the frustration of the protesters and promised to work towards tackling the issues raised.

“We have a common goal that we need to fight to make sure that every cedi is accounted for, and that is why we have actually exposed and publicised our report,” he said.

He assured the protesters that the service would meet with the leadership of the coalition to discuss ways by which some of the issues raised could be tackled.

Last month, the Auditor-General highlighted some financial irregularities amounting to about GH¢17.5 billion in the 2021 audit report of public boards and corporations and other statutory institutions.

It represented a 36 per cent jump in the value of irregularities from the 2020 figure of GH¢12.85 billion.

The new numbers brought financial irregularities in public boards and corporations over the last five years to over GH¢50.8 billion.

The GH¢17.5 billion uncovered in 2021 was mainly caused by the credit power sale of GH¢6 billion to customers of the Volta River Authority (VRA) and the Northern Electricity Distribution Company (NEDCo).

The irregularities were mainly in the form of cash, tax, payroll, debts and loans, stores and procurement, contract, rent and credit power.