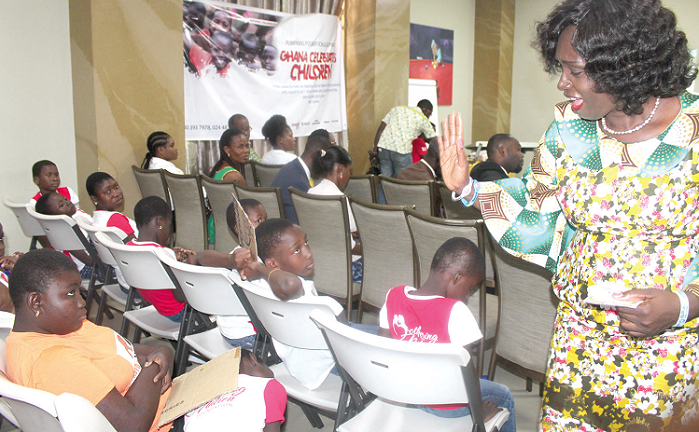 The Deputy Minister for Gender, Children and Social Protection (MOGSP), Mrs Gifty Twum -Ampofo has outlined pragmatic measures taken by the ministry to end streetism in the country by the close of this year.

She said the initiative, which would start in September this year, was a bold decision to end streetism as part of efforts to protect the rights of children and secure a better future for them.

The deputy minister said this in Accra at a programme organised by Pumpkins Foundation, a child focused non-governmental organisation dedicated to the promotion of the general well-being of poor and needy children in commemoration of the 2017 National Children's Day.

August 31, every year is celebrated as National Children’s Day.

The programme, organised on the theme: "Ghana 60 years on: Building a Solid Network of all Future Generations with Focus on Child Rights and General Welfare," was attended by child rights advocates, children and parents.

Mrs Twum-Ampofo said the exercise would start from September in Accra where the situation was getting out of hand and will be extend to other regions.

She said households of children who are found on the street due to poverty would be enroled on the Livelihood Empowerment Against Poverty (LEAP) programme, which is a bi-monthly cash transfer to give them a source of livelihood.

According to her, research had proven that the best way for a child to live was to live with their families, therefore, the ministry would do it best to reintegrate them into society and make sure orphans would get foster parents.

"We will make sure these children will be enrolled in schools where at least they will enjoy the school feeding programme to empower them for a better generation in future,” she said.

In the quest to improve the welfare of children taken off the street, Mrs Twum-Ampofo pointed out that the MOGSP in collaboration with the ministries of Roads and Highways, Local Government, Employment, Works and Housing would provide employment for those who had completed school, as well as shelter for those who do not have decent accommodation.

The deputy minister noted that people who are challenged would also enjoy the same benefits and would be trained in vocational and technical skills of their choice and mobilise funds to establish them when the need arose.

She appealed to Non-Governmental Organisations (NGOs) that have infrastructure to collaborate with the MOGSP so it could be renovated as shelter for such children.

The Executive Director of Pumpkins Foundation, Mrs Baisiwa Dowuona-Hammond stated that the National Children's Day was commemorated to remind Ghanaians that 60 years back, the problems of children in the country had still not been solved,therefore, as an organisation that advocated for the rights of children, there was a need to celebrate it as a remembrance of the problems.

"I have been monitoring over the years so l felt that probably this is the time for us to reflect on the problems which we all know so why have we not taken a time to know where the problem is and how we can remedy it," she noted.