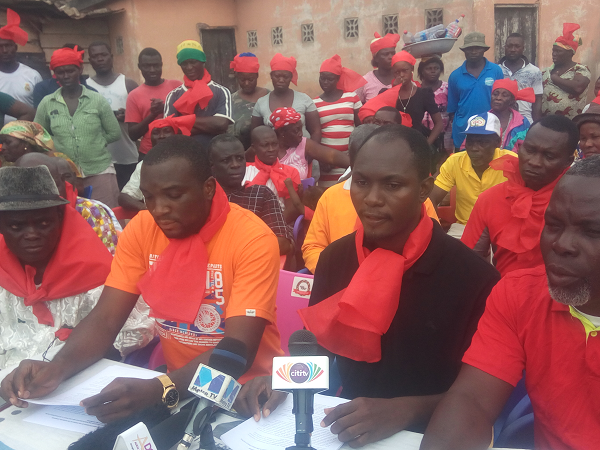 closed season policy was introduced by the Ministry Of Fisheries and Aquaculture Development in order to replenish fish stock but the fishermen are unhappy with the directive and have urged the government to address the factors leading to the dwindling of the fish stock rather than placing a month ban of fishing activities.

Clad in red, the fisher folks chanted songs on the streets of Jamestown in Accra to register their displeasure of the directive before addressing a press conference Friday.

They mentioned the activities of the trawlers, high light intensity fishing, the use of undersize and monofilament nets, the use of dynamite and obnoxious chemicals as some of the issues which need to be addressed by the government before implementing the closed season policy.

Speaking on behalf of the fisherfolk, the convener for the Friends of the Artisanal Fishermen, Nii Nettey Nettey explained that trawlers and tuna vessels scoop the belly of the ocean and trap anything in the way of their net.

The group, therefore, called on the government to ban the activities of fishing trawlers for a period of two years.

They also appealed to the government to equip the naval force and the marine police with ships and speed boats to enable them to work effectively.

The fishermen also advocated for a community surveillance team made up of informants and the Canoe Fishermen Association to report and arrest culprits.

In a speech, the Communication Director of Concern Youth of Odododiodio, Samuel Laryea called on the government to suspend the ban to allow for broad consultation and education for one year before the close season is announced and enforced.

According to Mr Laryea, even though they agree in principle to the ban, the timing is wrong.

“In principle we are not against a closed season to allow for the fishes to spawn and regenerate to increase the fish stock in our waters but it will interest you to know that the period for which this ban is to take effect is the major upwell season where fishermen get a little to pay for debts incurred over the lean season”.

He added that most communities along the beaches particularly in the Greater Accra Region have their festivals during this period and therefore perform rituals in the sea.

He said: “The catch from the sea is what is used for the preparation of the festival’s dish as well….....the period for the ban will affect the celebration of Homowo a great deal”.

Some fishermen in the Central and Sekondi in the Western Regions have raised similar concerns and asked the government to suspend the ban.