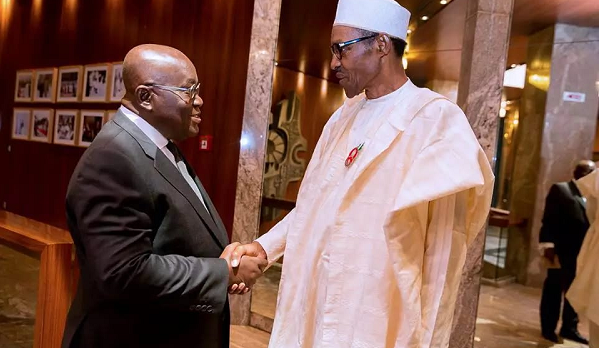 The President of the Federal Republic of Nigeria, Mr Muhammadu Buhari has commended President Akufo-Addo for the creation of the Special Prosecutor (SP) office and promulgating the SP Act to fight corruption in Ghana.

According to him, the move demonstrates the president’s wiliness and determination to weed out corruption from the public life of the country.

He said President Akufo-Addo’s efforts to clamp down on corruption has made Ghana become a destination for foreign direct investment just like Nigeria.

Mr Buhari was speaking as the Special Guest of Honour at the 61st Independence Anniversary of Ghana at the Black Star Square in Accra, Tuesday.

He also congratulated both the government and the Ghanaian parliament for their quick passage of the SP Act.

“I congratulate both the government and the parliament for the quick passage of the SP Act and its signing into law,” he said.

Mr Buhari, therefore, called on President Akufo-Addo to consider him as a partner in the quest to fight corruption in their respective countries.

“Your Excellency, you can be assured that you have a good partner in me as I look forward to any form of collaboration between Nigeria and Ghana in tackling the menace of endemic corruption,” he said.

He said Nigeria and Ghana share close cultural ties which have continued to shape the bilateral relations between the two countries.

He has, therefore, urged the two countries to create an enabling environment for their nationals to live peacefully in one another’s country uninhibited.

He further called on the leadership of the two countries to continue to realise the objectives and ideals of ECOWAS to ensuring security, peace and development of the sub-region.

He paid glowing tribute to the country's past leaders, particularly Osagyefo Dr Kwame Nkrumah, the first President of the country for the role he played in gaining independence for the country.