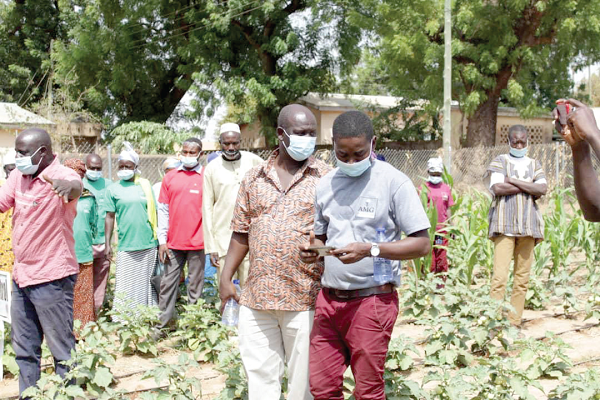 • Dr Francis Kusi (left) explaining the efficacy of the AMG fertilizer to the participants
30.5k Shares

Two hundred farmers, retailers, distributors and scientists from six districts and a municipality in the Upper East Region have completed a fertiliser application training and evaluation exercise organised by the Agriculture Manufacturing Group, (AMG Ltd).

The training and evaluation exercise sought to teach them how to use the AMG fertilisers appropriately to guarantee maximum field benefit and also to demonstrate to independent observers the efficacy of AMG Fertilisers.

The participants were made of 180 farmers, six district/municipal directors of agriculture, 14 agricultural extension agencies and field staff of the Council for Scientific and Industrial Research - Savanna Agricultural Research Institute (CSIR-SARI).

The Manga Station of CSIR-SARI hosted the participants at their technology park which was established through the support of AMG Ltd.

The lead Senior Research Scientist of the team of scientists and technicians who established the technology park, Dr Francis Kusi, acknowledged the support from AMG Ltd that enabled him and his team to present their proven technologies to the end users.

He added that as a research institute, CSIR-SARI had generated a good number of technologies which needed to be disseminated to the end users.

“However, funds to do this remain great constraint to the institute,” Dr Kusi said and, therefore, appealed to other companies and donors to partner with them in the efforts to disseminate their technologies to the farmers.

As part of the field demonstration, AMG fertilisers were applied to crops such as okra, soybeans, maize and garden eggs, alongside other fertiliser products on the market to the same group of crops and the results confirmed the superiority of the AMG fertilisers.

“At the end of the demonstration exercise, crops fertilised with AMG Fertilisers looked fresher, healthier and produced higher yield, according to the farmers, thus proving the efficacy and superiority of the AMG fertilisers over others on the Ghanaian market,” the Agronomist on the team, Dr Julius Yirzagla, said.

The technologies introduced to the participants at the park included drip irrigation system designed to suit the dry savannah zone to efficiently utilise the limited water resources to maximise production throughout the long seven to eight months dry season.

Dr Yirzagla encouraged the farmers to adopt those improved practices to augment the government’s efforts to promote access to quality improved seeds and fertiliser under the Planting for Food and Jobs (PFJ) programme to further increase food production and productivity in Ghana.

Dr Yirzagla added that low soil productivity due to poor and declining soil fertility was one of the major factors limiting crop yields in Ghana.

He said agriculture, through sustainable intensification, presented an opportunity to improve food security and reduce poverty and inequality, provided appropriate fertilisers were adopted.

He said current fertiliser recommendations were developed decades ago and mainly focused on the replenishment of only macronutrients such as NPK mainly through soil application.

Dr Yirzagla said that was considered blanket fertiliser recommendation, with little or no focus on secondary and micronutrients.

“As a result, the concentrations of several micronutrients in grains of crops have declined considerably over the last five decades, negatively affecting nutritional quality and exacerbating malnutrition.

He stressed that apart from the quantity and the composition of fertilisers, the mode of nutrient application played a key role in nutrient uptake by plants.