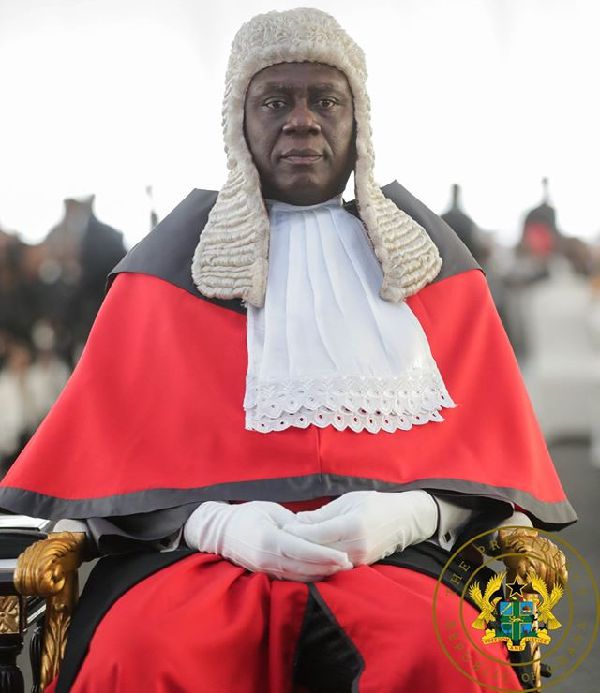 The Supreme Court has once again cautioned lawyers on their public pronouncements on the ongoing 2020 presidential election petition hearing.

According to the court, some of those comments were prejudicial and the attention of the bench has been drawn to it.

The Court said: "Immediately after proceedings counsel from both sides resort to granting interviews to the media, and at times some of them keep on twisting the facts which actually occurred in the court and seek to even prejudice whatever the court proceedings were. So lawyers who are engaged in it are to please have a look at Regulation 55 of L.I. 2423 (Legal Profession Etiquette, Conduct and Etiquette Rules).

The Chief Justice read Rule 55(C) which states: "A lawyer shall not publish or cause to be published a material concerning current or potential proceedings including proceedings for which the lawyer is engaged or seeks to be engaged in, which is inaccurate or has received comments or necessary description."

"Then 'C', is calculated or likely to a material degree to diminish or be prejudicial to the public confidence in the administration of justice."

Giving the caution Monday afternoon [February 8, 2021], the Chief Justice, Justice Kwasi Anin Yeboah said both parties from the petitioner and the second respondent were guilty of that.

The Chief Justice, specifically mentioned former Attorney-General and Minister of Justice, Marietta Brew Appiah Opong as an example during media interviews after hearing.

"Please both sides are guilty of it, and especially my dear sister Marietta [Brew Appiah Opong], at times, yes, you make statements even touching on the demeanor of witnesses, so please, it is a passionate plea from the bench, lets respect the ethical rules."

He also mentioned lawyer Yaw Oppong from the second respondent's side, who he said appeared in a media interview on Joy News' Newsfile programme on Saturday [February 6, 2021]; an act which breached Rule 38 of the Legal Professional Conduct and Ethical Rules, 2020.

"Mr [Yaw] Oppong too, you are also guilty of it, because you were at the Newsfile and we think that since you have been announced in this case, it is unacceptable," the Chief Justice added.

Last week the Supreme Court gave a similar caution on media interviews and the twisting of facts and went ahead to advise lawyers engaged in such interviews to put down their gowns and wigs and grant the interviews.

Mr Frank Davies for instance who is part of the legal team of the President Akufo-Addo (second respondent) was cautioned to desist from granting media interviews which was in breach of Rule 38.

"So we are just drawing your attention to the ethical infractions, and you have to advise yourself accordingly. Somebody other than you may do it, that is not our concern but you are precluded by law because you have been announced in the case on regular basis," the Supreme Court said last week Monday, February 1, 2021 in reference to Mr Frank Davies.

"And if you are a lawyer and you are not actively participating, please we passionately plead to you to put down your robes and grant the interview. We don't think that you should be in robes with the wig on..., and addressing the media," the court added.

Last week the Supreme Court mentioned Mr Frank Davies and asked him to be mindful of his post trial media interviews after court sittings especially as he was part of the team representing the second respondent in the case.

The Court said it was not comfortable with the post trial media interviews by Mr Frank Davies, something the court said breaches Rule 38 of the Legal Professional Conduct and Ethical Rules, 2020.

Rule 38 talks about lawyers who are involved in a case or has participated in a matter that is still pending in court.

The rule states that a lawyer who is practicing or has participated in the litigation or investigation of a matter that is still pending before a court, "shall not make an out of court statement or grant an interview to the media on the matter."

Referring to Rule 38, the Chief Justice, Justice Kwasi Anin Yeboah told Mr Davies that some of his comments violate the ethics of the legal profession.

"Mr Frank Davies, we respectfully draw your attention to the Legal Professional Conduct and Ethical Rules, 2020. Please, you look at Rule 38, the court is not comfortable with the post trial interviews that you [Davies] grant outside," Justice Anin Yeboah said Monday morning [February 1, 2021] when the 2020 presidential election petition came up for hearing.