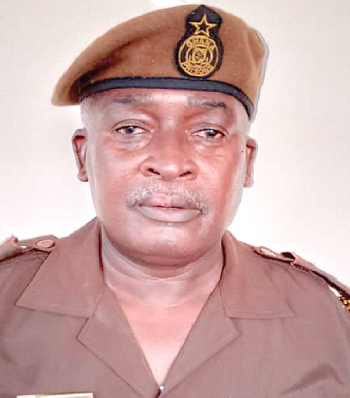 The Ghana Prisons Service (GPS) has called for an upward adjustment of the GH¢1.80 feeding allowance for prison inmates to reflect current living conditions in the country.

According to the Bono Regional Public Relations Officer (PRO) of the GPS, Deputy Superintendent of Prisons (DSP) Johann Nii Narh Nartey, the current GH¢1.80 daily feeding fee for an inmate was woefully inadequate to meet three meals for each inmate.

"We are supposed to reform and rehabilitate prisoners," he said, and wondered how the GPS was going to be able to reform a hungry prisoner.

DSP Nartey made the call in an interview with the Daily Graphic on measures the service was taking to prevent the spread of the coronavirus disease (COVID-19) at the Sunyani Prison.

He said an upward adjustment in the feeding allowance for prison inmates had become very necessary, in view of the fact that it was more than 10 years since the allowance was last adjusted.

Mr Nartey suggested that since the prisoners were adults, feeding them must be at par with what boarding students in senior high schools received.

He explained that prison inmates needed to be fed well to boost their immune system, so they would be able to withstand diseases most common in prisons in the country.

"We need to improve the quality of meals for our prisoners," he said, and encouraged relatives of inmates of prisons to take along with them raw foodstuffs for cooking during visitations.

According to him, even though such a move was not in sync with the strict rules of the Prison Service and  its motto: “Vigilance, Fortitude and Humanity”, it was imperative that the humanity aspect of the service’s motto was given attention to make prisoners comfortable.

The Sunyani Central Prison was built to contain a maximum of 450 inmates, but as of last Friday, the population was 846.

DSP Nartey said the overcrowded situation at the prison had resulted in the inmates developing all kinds of skin diseases.

"The number of inmates sometimes go beyond 900, and in such situations, we have to decongest by sending some of the inmates to prison camps at Yeji in the Bono East Region and Kenyase and Duayaw-Nkwanta, both in the Ahafo Region," he said.

DSP Nartey explained that all the inmates of the Sunyani Central Prison had been supplied with face masks, while Veronica buckets had been placed at vantage points to encourage regular hand-washing, all in an effort to forestall the spread of the COVID-19.

In addition, he said, two cells had been kept specially as "Isolation rooms" where new inmates were kept for the mandatory two weeks quarantine before they were allowed to mingle with the rest of the inmates.

Furthermore, he said, the Sunyani Municipal Assembly and the Sunyani East Rotary Club had taken turns to disinfect and fumigate the prison to support what the management of the prison did occasionally to ward off the disease.

He said because the number of inmates was increasing, it had become necessary that water supply to the prisons was improved upon.

DSP Nartey explained that the Sunyani Municipal Assembly had sunk one borehole to supplement the water supplied by the Ghana Water Company, which was not regular.

He said the constant pressure on the borehole resulted in occasional breakdowns and that had made it very difficult to pump water to the various areas of the prison.

While commending philanthropic organisations and individuals for their regular donations to the prison, DSP Nartey called on philanthropists and people with the means to go to the aid of the Sunyani Prison, particularly with items that offered protection against the COVID-19.

He said as part of measures to ensure physical distancing within the various departments of the prison, the service had directed all expectant and lactating female prison officers to stay off work for a period.