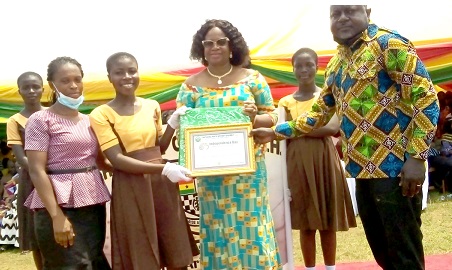 The District Chief Executive (DCE) for Fanteakwa North, Charles Oware-Tweneboah, who gave the assurance, said education was the key to the success of every human endeavour and the district assembly would put in all the needed resources to promote quality education delivery in the district.

“Education has been identified as a very strong pillar on which development of any village, town, and the country thrives.

“Investing more in education to improve in the quality of our human resource base of Ghana is one of the prime concerns of the government of the day, which has put in place several measures to ensure quality education in the country,” Mr Oware-Tweneboah stated at the 65th independence anniversary parade at the Fanteakwa North district capital, Begoro in the Eastern Region.

He urged students and pupils in the schools in the district to learn and pass the BECE well.

“The assembly is ever ready to support candidates who may need financial support, particularly the brilliant, needy students,” the DCE gave the assurance.

The assembly also honoured the best male and female candidates as part of the heritage month and the 65th Independence anniversary of the country.

The schools are Mills Duodu Demonstration Junior High, the Akoradarko District Assembly Junior High and the Benoni Foundation Presbyterian Junior High, which were adjudged as the first, second and third best schools respectively in the exams.

Eyram Aku Tamakloe and Kimarthi Aheto were the best female and male candidates.

While the schools received citations, the best two candidates were rewarded with undisclosed amounts of money and a certificate of recognition.

The Begoro Presbyterian Senior High School, the only senior high school in the district, was also given a special award for various roles it has played in education in the district.

Mr Oware-Tweneboah urged students and pupils to eschew indiscipline, disrespect for authority and the elderly and also shun drug and substance abuse, occultist practices, sexual promiscuity among other vices.

‘’You must rather devote your time and energy to study hard to achieve higher academic laurels so that as future leaders, you can effectively take over the leadership roles that some of us are performing today,” the DCE added.

Mr Oware-Tweneboah commended the performance of schools as well as the two best candidates for raising the flag of the district very high in the 2020 BECE.

The District Director of Education, Gloria Aggrey Kilson, urged the students and pupils to put in the same dedication and commitment displayed during the anniversary celebration into the core business of teaching and learning to raise the standard of education in the district.