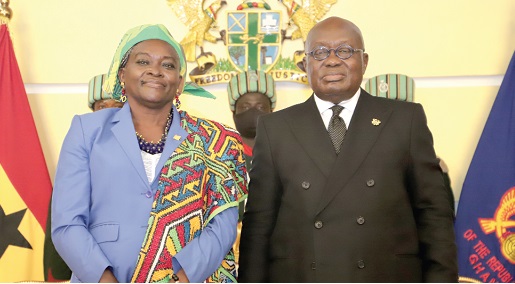 Six envoys accredited to Ghana have commended the country for its democratic credentials and creditability in the international community.

They have also pledged their determination to enhance bilateral and trade relations between their respective countries and Ghana.

The envoys made the commendation when they presented their letters of credence to President Nana Addo Dankwa Akufo-Addo at separate ceremonies at the Jubilee House in Accra.

The envoys are Ali Redjel of Algeria, Fidelia Graand-Galon of Suriname and Jon Tong Chol of North Korea.

The rest are Dr Usura Harahap of Indonesia, Leena Pyslvanainen of Finland and Mohamedour Musa Nje of The Gambia.

Each was received at the forecourt of the Jubilee House, where they mounted a dais and their national anthems and that of Ghana were played.

After that, they were led by the Director of State Protocol, Mr Yaw Kumah, to the Ceremonial Room of the Presidency, where they were welcomed by President Akufo-Addo.

Present were the Chief of Staff, Akosua Frema Osei-Opare; the Minister of Foreign Affairs, Ms Shirley Ayorkor Botchwey, and the Executive Secretary to the President, Nana Bediatuo Asante.

Mr Redjel pledged to work towards promoting bilateral relations with Ghana for the betterment of the people of the two countries. 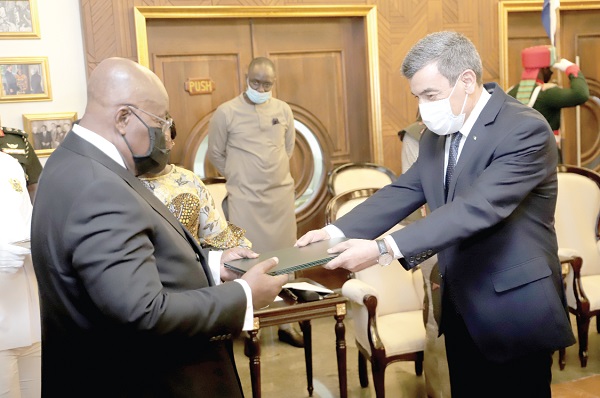 He said the two countries had great potential, especially in the areas of trade and investment, which could be harnessed under the African Continental free Trade Area (AfCFTA).

The Surinamese Ambassador said her country would continue to deepen relations with Ghana and commended the government for working with his country to ensure sustainable development and global peace.

Ms Graand-Galon also lauded President Akufo-Addo for his re-election as Chairman of ECOWAS.

Mr Chol said in recent years Ghana had attained “striking achievements in its nation-building efforts, including peace and security”.

He also said under the leadership of President Akufo-Addo, Ghana had managed to position itself on the path of progress and prosperity, in the face of adversity, and for that “your country is increasingly becoming the envy of Africa and the world at large”.

Dr Harahap traced the beginning of diplomatic relations between Ghana and Indonesia to 1959, saying: “I am ready to ensure further collaboration, as well as develop new areas of partnership.”

He said that his country could share its expertise in areas such as the manufacture of military equipment, including aeronautics engineering, with Ghana.

Ms Pyslvanainem said Ghana was “a big, special and close friend and collaborator of Finland, bilaterally and on the international front”.

Leena Pyslvanainen (left), the Finnish Ambassador to Ghana, in chat with President Akufo-Addo

She assured President Akufo-Addo of working to strengthen and expand the existing relations between the two countries and their people.

For his part, Mr Nje lauded the long-standing relations between Ghana and The Gambia and mentioned education and the judiciary as some of the sectors his country had benefitted from the support and expertise of Ghana. 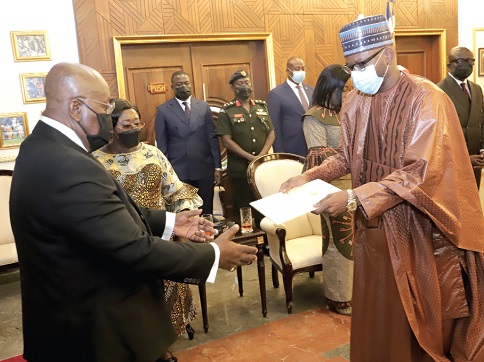 Mohamedour Musa Nje (right), The Gambian High Commissioner to Ghana, presenting his letters of credence to the President

“Growing up, my first teacher was from Ghana and the people who guided me in high school to reach where I am today are my Ghanaian teachers,” he added.

President Akufo-Addo said Ghana was looking forward to increasing bilateral relations with the various countries in many areas of cooperation that would inure to the benefit of their people.