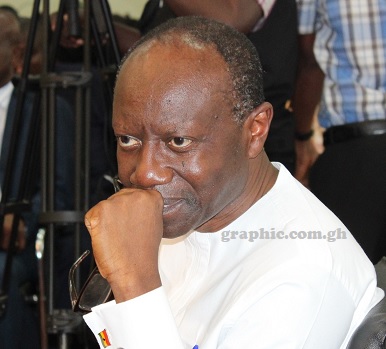 The nation’s focus will be on the Minister of Finance, Ken Ofori-Atta, today when he outlines detailed measures the government has put in place to restore the economy.

The Finance Minister will speak to the nation at 1 p.m., during which he is expected to assure the citizenry that all is not lost, and that the government is focused on restoring normalcy to the economy.

A source close to the Finance Ministry told the Daily Graphic yesterday that Mr Ofori-Atta would lay out a major policy document that would spell out bold measures to restore the economy to pre-COVID-19 era.

It further said the minister would not shy away from the current challenges the economy was going through.

According to the source, the government had the track record of prudent economic management, but acknowledged the fact that the situation was not a quick fix.

The economy has been badly hit by the global economic downturn.

Last Tuesday, President Nana Addo Dankwa Akufo-Addo announced that the Finance Minister would announce “difficult decisions”, but he did not give details.

The President’s announcement and snippets of what had transpired at last weekend’s Cabinet retreat at the Peduase Lodge give an indication that Ghanaians should brace themselves up for some tough but necessary decisions.

The minister’s address comes as prices of goods and services have shot up astronomically, putting the ordinary Ghanaian at the receiving end.

Surging inflation and higher petroleum prices, fueled by a multiplicity of factors, have eroded the purchasing power of the people.

“Rising food prices, upward adjustments in petroleum prices and their effect on transport fares and exchange rate depreciation pass-through had pushed up inflation to 15.7 per cent at the end of February 2022, 5.7 percentage points outside the medium-term target band,” the MPC statement said.

The value of the cedi has also plummeted against the major international currencies, currently selling above GH¢8 to a dollar.

Ahead of today’s address by the Finance Minister, the official Facebook account of the Jubilee House advertising the press conference yesterday gave hints of some of the issues on the table.

“Government to pump $2 billion to rescue the cedi; government cuts salaries of appointees by up to 30 per cent; policy rate increased substantially to 17 per cent, cost of loans to go up,” it said.

High on the bill will be a review of some of the government’s flagship programmes.

Numbering 16, the programmes, including the free senior high school (SHS), Planting for Food and Jobs (PFJ), Planting for Export and Rural Development (PERD), One District, One Factory (1D1F), One Village, One Dam (1V1D) and the Nation Builders Corps (NABCO), are strategic interventions by the government to enhance economic growth, improve food security, drive job creation and improve incomes and the well-being of all Ghanaians, especially the poor, and transform the structure of the economy.

An official statement that the flagship programmes would undergo a “review” elicited different interpretations within the public space, with some people suggesting that some of the programmes could be scrapped or suffer massive budgetary cuts, which would undermine their contribution to national development.

But the Minister of Information, Kojo Oppong Nkrumah, came in to calm nerves, especially with the free SHS, saying the review would be done within the fiscal framework of what the government was working with.

Doubtless, Ghanaians will be waiting with bated breath to see the extent of the review.

Given the current economic conditions, some Ghanaians have advised the government to seek a bail-out with the International Monetary Fund (IMF) and build policy credibility in the face of the downgrading of the country by international credit rating agencies.

However, government officials, at various fora, have ruled out a deal with the Bretton Woods institution, insisting that the nation had the wherewithal to handle its own challenges by increasing domestic revenue mobilisation.

But the Electronic Transactions Levy (E-Levy), on which the government had banked its hopes for revenue generation, is still locked up in Parliament.

In the wake of the challenges earlier this year, President Akufo-Addo had announced plans by the government to cut the budget expenditure of all ministries, departments and agencies (MDAs) by 20 per cent for the year.

Speaking at the 2022 National Labour Conference in Kwahu in the Eastern Region, the President explained that the cut was meant to bring down expenditure as a result of the general economic difficulties.

“We have to make concerted efforts, as partners, to hasten our recovery from the COVID-19 by finding intelligent ways of bringing everyone on board to contribute their quota, no matter what,” he said.

The Finance Minister’s menu is not going to be all bitter, as the signs are clear that some of the COVID-19 restrictions are going to be relaxed.

Already, the government has made it known that the Cabinet has agreed that the land borders be reopened after two years of closure.

With a general decline in the COVID-19 situation, buoyed by improved vaccination coverage of some 13 million people and the availability of millions of doses of vaccines, the government will have every reason to relax the restrictions.

The reopening of the borders will boost economic activities, especially in border communities, and support the larger economic recovery process.