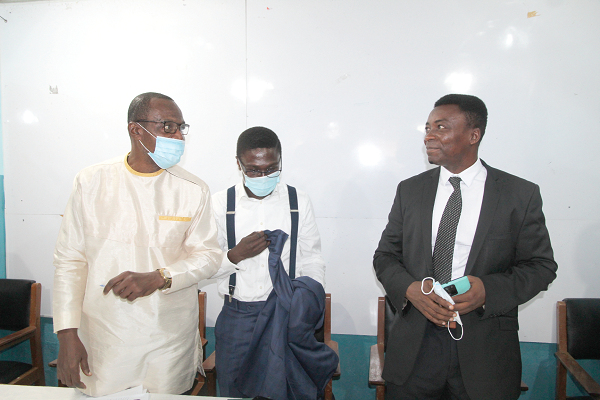 A Lawyer and academic, Dr Nana Oppong, has called for the enactment of a law that will recognise and protect journalism as an essential national service, similar to the way the Judiciary is protected.

“We must pass a law to be described as the Defenders of Public Interest Act (DOPIA) in order to provide special security, targeted training, compensation and financial support for professional journalists and their families and other persons engaged in sensitive assignments, investigations and projects of national importance,” he said.

Dr Oppong also asked that the pre-crime investigative capacity (PCIC) of the police and security services be overhauled and significantly improved to make the prevention of crime against journalists successful.

He made the call at a public lecture on journalism and the protection of journalists at the Ghana International Press Centre in Accra yesterday.

The forum, which also marked the two-year anniversary of the killing of investigative journalist, Mr Ahmed Hussein-Suale, brought together media practitioners and institutions working in the interest of journalists.

Dr Oppong further called for the amendment of the Constitution, saying: “We must make a distinction between journalism as a human right of the citizen and journalism as a profession. Journalism must be recognised at law as a professional body, much the same way as lawyers, accountants, doctors and such similar bodies.

“This would mean there must be minimum competences, minimum conditions and minimum wages for all professional journalists,” he said.

He said that would help increase the technical, financial and political powers of journalists and reduce their vulnerabilities.

“Every profession or trade moves forward and gains strength and power when a substantial or significant number of its members are skilled and passionate about the profession and see their long-term interests linked to an organised society, association or chamber for change,” he added.

Dr Oppong, however, admonished journalists to be truthful and just in the conduct of their duty of reporting on happenings in society.

The President of the GJA, Mr Affail Monney, urged the police to expedite investigations into the murder of Mr Hussein-Suale and prosecute the perpetrators of the crime.

He said it was unacceptable for perpetrators of such a crime to be walking freely, two years after the incident, in spite of assurances by President Nana Addo Dankwa Akufo-Addo to have the killers arrested.

"It is not within the bounds of possibility to bring Hussein-Suale back to life, but it is within the confines of the capacity of the police to bring the perpetrators to book. This is our conviction and we ask the authorities to act with lightning speed to purge the stain on the country’s image, the dim of our glittering democracy and the chill on media freedom inflicted by the unprecedented savagery of Suale's death," Mr Monney said.

According to him, there had been an increase in threats against journalists following the December 7 elections and called on the law and order community to take a “hard look and put a hard stop to the insidious threats and vertiginous rise in the number of attacks on journalists”.

For his part, the Executive Secretary of the MFWA, Mr Muheed Saeed, said it was the responsibility of journalists to champion the call for justice for their murdered colleague to serve as a deterrent to people who used violence against journalists as a means to silence them.

He further implored journalists to be extra careful as they went about their duties, since institutions with the mandate to protect them were failing.

In a solidarity message, the Committee for the Protection of Journalists said prior to his killing, Mr Hussein-Suale had told the committee that he was aware of the threats against him.