Dr Bawumia calls for deepening of ties between Ghana, UK 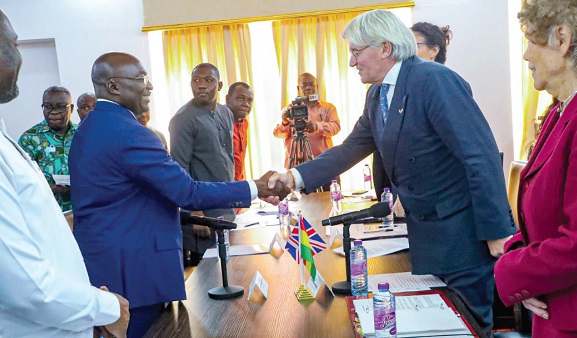 The Vice-President, Dr Mahamudu Bawumia, has lauded the existing cooperation between Ghana and the UK and expressed hope that the two countries will continue to work together and chart new grounds, especially in the area of climate change.

Dr Bawumia was addressing the seventh session of the UK-Ghana Business Council (UK-GBC) at the Jubilee House in Accra last Friday.

“I think the setting up of the UK-GBC makes a lot of sense and I am glad that we are continuing in the same spirit of cooperation and partnership between Ghana and the UK.

“In that context of cooperation, we have seen, between the two countries, a solid record of accomplishment thus far,” he added.
The UK-GBC was set up in 2018.

At the meeting were the UK Minister of State for Development and Africa, Andrew Mitchell; the UK Trade Envoy to Ghana, Baroness Kate Hoey, and the UK High Commissioner to Ghana, Harriet Thompson.

According to the Vice-President, the council had made some significant gains over the last six years, and mentioned some projects that were being supported by the UK government as expansion works on the Kumasi and the Tamale International airports and the Eastern Regional Hospital in Koforidua.

Others were the Children and Maternity Block at the Komfo Anokye Teaching Hospital (KATH); an Aqua Africa Water project, which he said was supplying critical drinking water to 16 towns across the country; the Obetsebi-Lamptey Interchange in Accra; phase two of the Kejetia Market project in Kumasi; the Bekwai Hospital and the Tema-Aflao Highway projects.

Mr Mitchell traced the beginning of his relationship with Ghana to when he was a young banker in the country in 1983, saying: “By our priority sectors, the UK-GBC has helped us target areas where we can collectively make the big difference.”

He acknowledged the central role the council was playing to deepen bilateral relations between the two countries and mentioned increased trade and investments, the building of partnerships, creation of jobs, ensuring sustainable growth and building mutually shared prosperity as some of the areas that were receiving support and which could be expanded.

On the prevailing economic challengings in Ghana, Mr Mitchell said: “We have also faced our own economic challenges in the UK, but we benefit hugely from the fact that a highly successful finance minister is now our prime minister.”

He commended Ghana for reaching a staff level agreement (SLA) with the International Monetary Fund (IMF) and said although reforms that came with the agreement were difficult, they were necessary to bring the economy back on track.

“I am keen to hear about what your recovery plan looks like and how the UK might support. I am pleased that the UK has been able to help so far through our work on debt management and our long-standing revenue programme, which includes an embedded official of the Ghana Revenue Authority (GRA).

“On the external side, trade can also be part of the solution, including our trade partnership agreement. It is good we have both reduced tariffs and I know our officials are working closely together to maximise the mutual benefits of those agreements,” Mr Mitchell added.