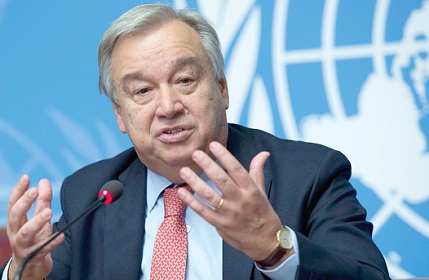 The 27th United Nations Conference on Climate Change (COP27) has gathered steam as leaders from the least developed countries are calling for urgent action to address the impact of climate change in their countries.

At yesterday’s opening of the Climate Leaders Summit, the high-level segment of COP27, the leaders of the Least Developed Countries (LDC) Group stressed that their countries needed compensation from developed countries to address the impact of climate change.

The leaders of the LDCs called on richer countries and heavy polluters to provide funding for losses and damages in least developed countries.

Some leaders of the LDC group, made up of 46 countries, said the world must turn attention to them because although they contributed just "a fraction of global emissions", they were heavily impacted by the effect of global climate crisis.

The Chair of the LDC Group, Madeleine Diouf Sarr, who is also the Finance Minister of Senegal, stressed that COP27 must “capture the voice and needs of the most climate-vulnerable nations and deliver climate justice”.


She said issues such as who paid for poorer countries to transition to cleaner energy, making sure no communities were left behind in an energy transition and boosting how well vulnerable people could adapt to climate change had been neglected for far too long.

Ms Sarr said the LDCs needed an agreement to establish a dedicated fund to pay countries that were already facing the effects of climate change.

She added that the African bloc would push for sustainable funds to help developing countries adapt.

“We have delayed climate action for too long,” Ms Sarr said, pointing to the promised $100 billion a year in climate aid for poorer countries that was pledged more than a decade ago.

The President of Senegal, Macky Sall, said it was unacceptable for Africa to always remain in the position of those who paid the price for pollution caused by others.

"Africa is not a highly industrialised continent and, therefore, global warming is not our fault, and all African countries together cause no more than four per cent of the global emission of carbon dioxide,” Mr Sall stressed.

He called on leaders in Africa to remain united and speak with a common voice to ensure that the continent received the required support to tackle climate change issues.

Again, he said, Africa needed a green transition that was "equitable and just" instead of decisions that jeopardised development.

He underscored the need for a just transition in the energy sector, saying it was critical because over 600 million Africans remained deprived in terms of universal access to electricity.

The Prime Minister of Barbados, Mia Mottley, said leaders at COP27 must explore external sources of funds for climate financing to include multinational companies.

"How do companies make $200 billion in profits in the last three months and not expect to contribute at least 10 cents in every dollar of profit to a loss and damage fund? This is what our people expect," he said.

The UN Secretary-General, Antonio Guterres, called for a united front and collective action to deal with climate crisis.

He noted that climate crisis was a great threat to achieving the Sustainable Development Goals (SDGs).

Mr Guterres said the existential threat of the menace was a wake-up call on nations to rally support of all stakeholders to stem the tide.

"We are on a highway to climate hell with our foot on the accelerator," he said.

Mr Guterres said given that the climate crisis was an existential threat to humanity, there was the need for "a historic deal" between rich countries and emerging economies that would reduce emissions and keep the temperature rise to the more ambitious Paris Agreement target of 1.5 degree celcius above the pre-industrial era.

While calling for prioritisation of renewable and affordable energy for all, the UN Secretary General urged top emitters — the United States of America and China, in particular — to step up their efforts.

The UN chief said it was a "moral imperative" for richer polluters to help vulnerable countries which were often the least responsible for climate change”.