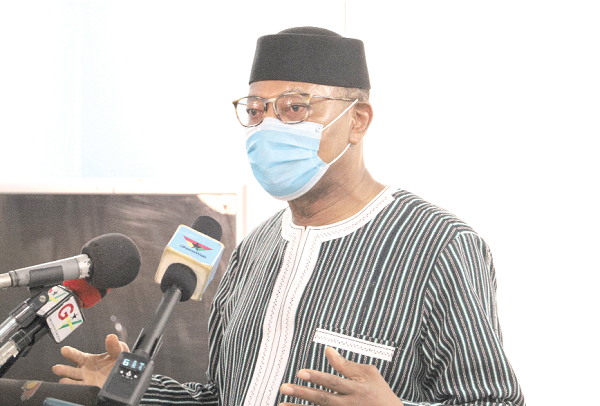 The Head of the United Nations Office for West Africa and the Sahel (UNOWAS), Dr Mohammed Ibn Chambas, has called on all stakeholders in next Monday’s general election to cooperate and work with the Electoral Commission (EC), so that it can function at optimal level to deliver credible elections.

He equally entreated the EC to endeavour to reach out to all stakeholders, especially the political parties, to build trust and confidence and assure them that the commission was a neutral referee bent on ensuring that the process was credible and transparent through a level playing field for all participating parties.

Dr Chambas, who is also the UN Secretary General’s Special Representative, made the call at a meeting with editors and executives of the Ghana Journalists Association (GJA) at the Ghana International Press Centre in Accra yesterday.

The UNOWAS Head, who celebrates his birthday on December 7, noted that to ensure successful elections, the UN had been working closely with the European Union (EU) and other partners to support the EC to ensure that it had the logistical and technical support to be able to perform its duty to the satisfaction of all actors.

“This is because if the EC plays its refereeing role in a neutral manner, if the preparation is thorough and Ghanaians are able to come out and exercise their franchise, as has been the case in the past, at the end of the day it is actually at the polling stations that the elections will be won or lost. This is the kind of system we want to see play out on Election Day on December 7, 2020,” he said.

Dr Chambas said the security agencies must be seen to enforce the law without fear or favour.

He said there were clear electoral laws in the country which every citizen must endeavour to respect and those who fell foul of those laws brought to book, adding: “This must happen without any political colouration.”

Furthermore, he wanted to see the law against vigilantism enforced in a neutral manner across the board.

“So if any group begins to act as a vigilante group, they are violating the laws of the land and the law must take its course. The rule of law must be respected, as we are seeking to build a country based on the principles of the rule of law and accountability,” he said.

On the deployment of security forces across the country, he said it should be done in a fair and transparent manner.

Dr Chambas entreated the media not to give voice to people who used hate speech to incite others to violence during the elections.

“We have seen the negative consequences of hate speech on our continent far too often. We have seen the pain, anguish and destruction that it has brought, So, as the Fourth Estate of the Realm, pay particular attention to this,” he said.

He stressed the need for campaign messages to be focused on issues.

On the COVID-19 pandemic, Dr Chambas called for the necessary safety etiquettes outlined by the World Health Organisation (WHO) to be adhered to during the elections because  the pandemic was still a threat, especially with the alarm about the second wave of infections.

The President of the GJA, Mr Roland Affail Monney, commended Dr Chambas for his affinity and love for the association and Ghana.

He said the media had been capacitated enough to do the needful during the elections as a result of the training it had had, in collaboration with other institutions.

The media, he said, should never be agents of destructions but apostles of peaceful, credible, fair and transparent elections whose outcome would be acceptable to all.