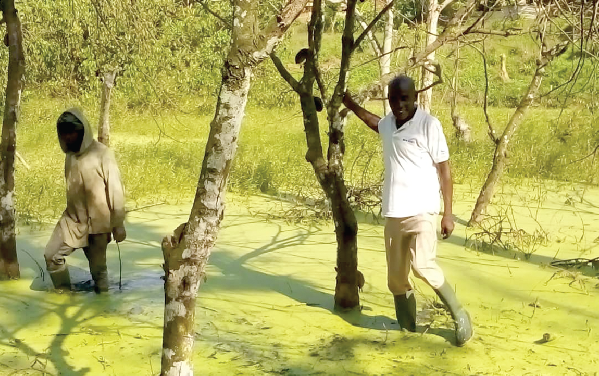 A 67-year-old retired public servant, Mr Abraham Kofoya-Tetteh, has made a passionate appeal to the Minister of Roads and Highways, Mr Kwasi Amoako Atta, to compel a construction firm that caused destruction to his cocoa farm at Abisim-Dawa in the Suhum Municipality of the Eastern Region to compensate him.

Mr Kofoya-Tetteh said Jutap Construction Limited blocked the path of a water body during a construction process, which caused his cocoa farm to be flooded and some of the crops submerged.

He has since appealed to the minister to also ensure that the company reclaimed the farm from the flood waters of River Atiawa, which passes through the farm, but was partially blocked for the construction of the Abisim-Dawa-Nankese Road, leading to the floods.

That stretch on the Suhum-Adakwa-Nankese Road, awarded to the construction firm about two years ago, falls under the Cocoa Roads projects.

According to Mr Kofoya-Tetteh, Jutap Construction Limited had since March this year constructed a small culvert on the Atiawa rivulet which impeded the flow of the river as a result of which about three acres of his cocoa farm had been flooded.

The retiree indicated that the cocoa trees had either withered or been submerged which had brought a lot of hardship to him and his family as a whole.

He said several attempts to get the Eastern Regional Directorate of the Department of Feeder Roads, the supervising agency, to address the issue had not been successful.

Mr Kofoya-Tetteh said on May 12 this year, he wrote to Jutap Construction Limited on the same issue, but received no response.

He said the indifference of the construction firm to the damage caused to his farm and source of livelihood had forced him to officially notify the Regional Director of the Department of Feeder Roads, Mr Seth Osei Nketia, with copies to the Director of Feeder Roads and the Ghana Cocoa Board, both in Accra, on May 26, 2021.

Those efforts also, he said, fell on deaf ears.

As of November 24, 2021, a large portion of the cocoa farm remained flooded, with many of the trees virtually in a state of firewood, the Daily Graphic observed during a visit.

At the Eastern Regional office of the Department of Feeder Roads, the Deputy Regional Manager in charge of Operations, who gave his name only as Mr Addison, said he was aware of the issue.

Mr Kofoya-Tetteh, however, declined the invitation to attend such a meeting, saying Mr Nketia had refused to meet him for the past eight months.