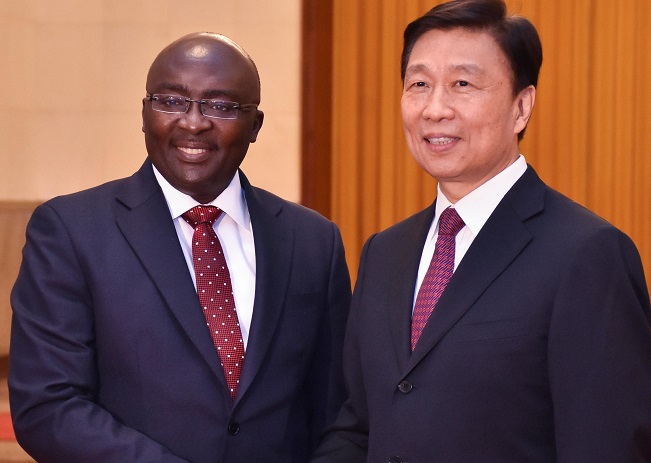 China has committed to support Ghana’s one-district, one factory (ODOF) policy with $2 billion.

The China National Building Material Equipment Import and Export Corporation has signed a memorandum of understanding with the Association of Ghana Industries to seal the deal.

Addressing journalists at the Kotoka International Airport yesterday on his arrival from an official visit to China, the Vice- President, Alhaji Dr Mahamadu Bawumia, said the amount formed part of a total commitment if $15 billion the People’s Republic of China and its private enterprises were contributing to Ghana’s economic transformation agenda.

He said an additional $4 billion commitment was under discussion and was likely to materialise in a month’s time.

The visit was at the invitation of the Chinese government and it was the first high-level official state visit to China by the Akufo-Addo government since it took office in January this year.

The Vice-President led a delegation of ministers and businessmen on a four-day working visit to China to deepen diplomatic and economic ties, as well as create opportunities for Ghanaian businesses to form partnerships with their Chinese counterparts.

Dr Bawumia explained that because the ODOF policy was a government initiative to be implemented by the private sector, the funds would be disbursed through banks such as the GCB, the Universal Merchant Bank and the Access Bank to the private sector.

He said factories under the initiative would be built by the private sector, in partnership with the China National Building Material Equipment Import and Export Corporation.

He said as part of the commitments, the remaining $2 billion of a $3 billion loan facility to Ghana contracted by the previous administration and which was frozen had been reactivated successfully.

“I met with the Vice-President of the China Development Bank and we were able to renegotiate the activation of the remainder of a $3 billion master loan facility brokered by the former administration,” he said.

Dr Bawumia said $1 billion of the amount had been released already and was used in financing the Ghana gas project at Aboadze in the Western Region.

He said the China Exim Bank had also committed $1 billion to support infrastructure development in Ghana.

“The China Railway International Group has signed a MoU to provide $10 billion to support components of the massive infrastructure development programme in the railway sector,” he said.

The Vice-President explained that the infrastructure needs of the country were vast and, therefore, the government would prioritise elements to be financed under the MoU.

In terms of grants, he said, China had agreed to provide Ghana with 100 million RMD and an additional 50 million RMD for the Ghana Army.

He said China also accepted a proposal from Ghana for 90 bridges to be built in the country and reiterated its commitment to provide four patrol boats for the Ghana Navy.

The Chinese government, he said, had further agreed to construct a road interchange at Point Seven in Tamale, which would be the first in the region.

He attributed the success of the China trip to what he described as “good home work” done before embarking on the trip, efforts put in by the Chinese Ambassador to Ghana and support from former President John Agyekum Kufuor.

Dr Bawumia said the trip was undertaken to sell Ghana and the vision of President Nana Addo Dankwa Akufo-Addo to leverage China’s partnership for a massive economic and infrastructural transformation.

“We essentially tried to make a case for enhancement in the development partnership between Ghana and China, one that was expected to be based on trade and investment and shared prosperity for all, rather than aid.

“Before embarking on the trip, we were fully aware that given Ghana’s economic situation, we needed a ‘big bang’ approach within a Marshal Plan for Ghana to solve the country’s needs such as infrastructure, energy, water, sanitation, roads and housing,” he said.

He said the nation’s needs were so massive that a Marshal Plan was recommended by the Economic Management Team to be able to lay the foundation for a strategy for agricultural and industrial transformation.

On how to finance the national development agenda, Dr Bawumia said a paradigm shift from the traditional model of financing had become very necessary because it was no longer sustainable.

He said traditionally, the model had relied on aid and borrowing, adding: “Unfortunately, the country has borrowed itself out of space. The debt stock is at a level that does not allow more space for borrowing to finance the type of investment that the country needs.”

“Of course, China has been financing infrastructure in Ghana according to the module it has used so far, which is: we borrow from them and collateralise with oil proceeds, which has since been outlawed by the Petroleum Management Act,” he said.

Dr Bawumia said it, therefore, became important to develop a new paradigm in terms of the country’s economic relationship with China to persuade that country to consider the kind of partnership the current government intended to build with China, which focused on investment and shared profitability, rather than aid.

He acknowledged that for such or any international investment partnership to be successful, there were some critical things that were required and which the delegation, with the help of the Economic Management Team, put in place before the trip.

The three critical things, he said, were a credible economic programme on which the team made a strong case with the ODOF policy, the Planting for Food and Jobs programme, the one-village, one-dam policy and other policies across various sectors, which China saw as credible too.

“In terms of infrastructure, the question would be if the country has a portfolio of projects that are viable in terms of partnerships, and so before we left, we asked the same question of ourselves and the Economic Management Team recommended that such a portfolio of projects and priorities across all sectors be put together, which we did, to facilitate discussions successfully,” he added.

“The last critical thing to facilitate international investment partnerships is how the country intends to finance the projects or the financing module to be used.

Mr Bawumia explained that the bauxite reserves alone, if refined today using the world price as the base, would generate $460 billion.

He said that financing explanation was used to convince China that Ghana was worth investing in, adding: “If Ghana needs just $20 billion to do a major massive Marshal Development Plan and it has $460 billion sitting in the ground, then all we need to do is develop a financing module that leverages a small fraction of our reserves to finance the infrastructure needs.”

According to him, China had not considered that kind of module, but upon explanation, the team was given good listening, which had resulted in the success from the trip.

He was quick to add that all negotiations were guided by the principle of value for money to ensure that they were in the best interest of the country.

He commended the Chinese Ambassador for her facilitating role in the success story, saying it would ensure the strengthening of Ghana-China relations.