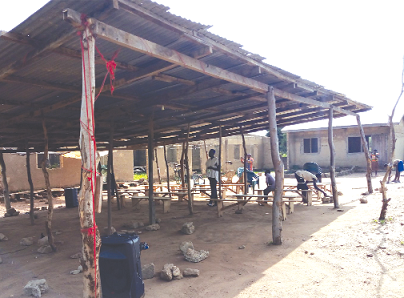 The church grounds being prepared for an evening service
30.5k Shares

More than 30 primary school pupils and junior high school students have abandoned their homes, families and education to seek salvation at the Synagogue of Mercy, a church at in the Jirapa municipality in the Upper West Region

and community leaders are livid over the role of Pastor Charles Ansoanuur, whom they accuse of harbouring the minors after indoctrinating them to school to pursue religious redemption.

The children, aged between 10 and 18, now reside on the church premises, but it is not clear how they feed themselves or where exactly they sleep at night, as they are not prepared to answer any questions on the premises.

When the Daily Graphic visited the church about three weeks ago, it observed that about 30 young boys and girls were on the premises, which consisted of a simple shed roofed with corrugated iron sheets, with a bare floor.

Some of the children were engaged in fetching water, tidying the church grounds or arranging the benches that served as pews, against the background of Gospel songs from an electronic sound player.

Pastor Ansoanuur, 35, trained as a teacher at the Jahan College of Education in Wa and taught at the Yagha Municipal Assembly JHS from 2014 until July 2018 when he was transferred to a school at , his .

According to the Headteacher of the Yagha High School, Mr Joseph Kogro, the children abandoned the classroom in droves to follow Mr Ansoanuur as he left to pursue his pastoral calling.

The spectacle has raised anxiety among the parents of the children and some members of the community, many of whom accuse Pastor Ansoanuur, the Founder and Leader of the Synagogue of Mercy, of indoctrination.

One parent, Ms Agnes Gorziel, said her two children – one of them biological – had declined admission to senior high school because “they said they didn’t need a certificate to enter Heaven”.

With tears flowing down her cheeks as she held the admission forms of the two children during a 10-minute interaction, Ms Gorziel said the ordeal of child upkeep for a widow could not be more painful than to see a son later abandon education altogether on the basis of religious fanaticism.

Her son, Kelvin Gorziel, should have joined his fellow first-year students on the Green Track of the double-track system at the St Basil Senior High School at Kaleo in the Nadowli District in September this year, while the girl, Sophia , has been offered admission to the Lawra Senior High School on the Gold Track.

According to Ms Gorziel, both children had expressed their unwillingness to return to school and had left home to live on the church premises.

She said she had gone to see the children on the church premises but they had ignored her pleadings to return home.

“I don’t know what to do. Someone must intervene before something happens to the children of this community,” she pleaded.

When contacted, Pastor Charles Ansoanuur declined to respond to questions by the Daily Graphic, but one church member, 20-year-old Desmond Ansoanuur, said: “The pastor cannot be blamed if the children are refusing to go home.”

He said a parent had once come to confront the pastor but the child declined to leave because the child said the parent was not taking proper care of him.

The Chief of Yagha, Naa Namarie Diedong II, worried about the situation at , a neighbouring community, said he had complained to both the police and the Jirapa Municipal Education Directorate but all to no avail.

According to the police, they were still investigating “to find whether there is a possibility of criminality”.

The Station Officer at the Jirapa Police Station, Inspector Stephen Kyeremeh, confirmed to the Daily Graphic that a complaint had been lodged about the problem but said the police needed time to investigate and establish whether or not Pastor Ansoanuur was involved in a criminality for possible prosecution.

But Mr Hakeem Suleman, a senior investigator at the Upper West Regional Office of the Commission on Human Rights and Administrative Justice (CHRAJ), said it was wrong for any person to act in a way that would obstruct the education of a child.

He said the right to education and children’s rights, as contained in articles 25 and 28, respectively, of the 1992 Constitution, along with the Children’s Act (Act 560), were good grounds to prosecute anyone whose actions impeded the education of any child.