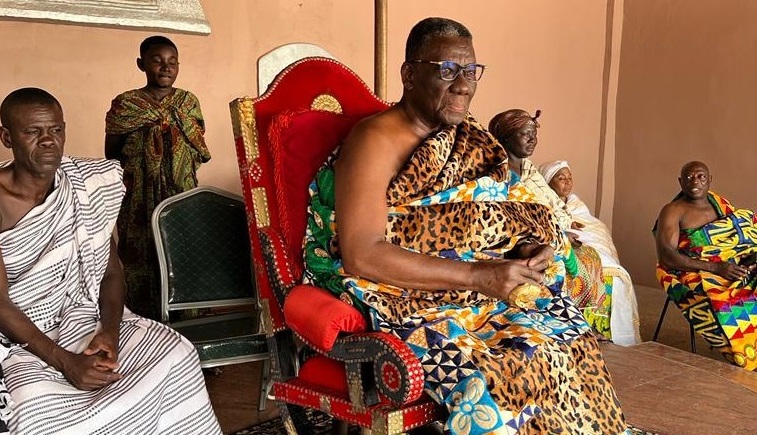 Sub chiefs of Asante-Mampong Traditional Area have commended Daasebre Osei Bonsu II, the Paramount Chief of the Asante-Mampong and the Occupant of the Silver Stool of Asanteman for mooting the idea not to entertain illegal mining (galamsay) in the traditional area.

The commendation was made by the Gyaasehene, Nana Boakye-Yiadom Atonsa on behalf of the chiefs during the last Traditional Council meeting at the Amaniampong Silver Stool Palace at Asante-Mampong at the weekend.

He noted that the pragmatic decision by the Mamponghene  was welcomed by the entire people in the Traditional Area.

He noted that, illegal mining has destroyed several farm lands and water bodies in many communities, leaving several people in abject poverty.

Nana Boakye-Yiadom Atonsa said “if such illegal mining goes on in our area, it will definitely destroy our water bodies, poison our main source of drinking water and furthermore destroy our farm lands”.

He assured Daasebre Osei Bonsu that, the Chiefs were ever prepared to continue to rally solidly behind him in the efforts to bring sanity in the area.

He was of the belief that none of the chiefs would compromise with such principles, stressing that it will be suicidal for the chiefs to allow themselves to be used by those unscrupulous and diabolical nation wreckers who were always in for their personal aggrandizement.

Daasebre Osei Bonsu for his part, thanked his chiefs for their commendation and assurance and noted that such meaningful backing provided by the chiefs give him the necessary impetus to exhibit more of his endowed potential to the fullest.

He praised the chiefs for backing the idea and stressed that he was there for the development of the Mampong Traditional Area and will not countenance with anything which will not be of the interest of the Traditional Area.

He commended the Mamponghemaa, Nana Agyakoma Difie for her genuine advice and working in close collaboration with him.

The Mamponghene urged the chiefs in his Traditional Area to continue working  in unity with their Queen Mothers and their subjects and noted that such effective coordination will definitely bring development.

Daasebre Osei Bonsu said his doors would continue to be opened for advice and suggestions all for the best interest of the area.

It will be recalled that the Minerals Commission had published an Application of Notice pending the application for mineral rights to allow Active Target Natural Resources Limited to mine in the Mampong Traditional area.

Consequently, Nananom at a meeting, called on the Minister of Lands and Natural Resources to halt any plans by the Minerals Commission to undertake any mining activities within the Mampong Traditional Area.

However, following the unyielding position of the Traditional Council led by the Omanhene, Daasebre Osei Bonsu II, the Minerals Commission retreated.

The Commission’s letter signed by its Chief Executive, Martin Kwaku Ayisi, and copied to the Mamponghene, said: “We note that Nananom have voiced their objection to any mineral activities or operations in the Mampong Traditional Area.