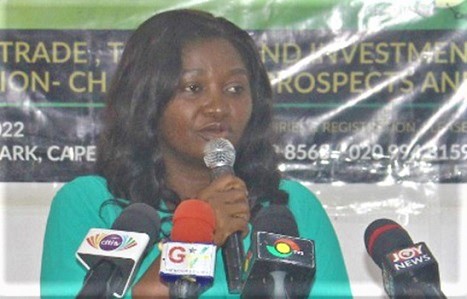 Justina Marigold Assan, the Central Regional Minister, delivering an address at the launch of the fair Follow @Graphicgh

After a 24-year sabbatical, the Central Regional Trade and Investment Exhibition, Central Expo, a business and trade event, has returned.

The fair, which aims at allowing firms to demonstrate their capabilities to make the region known for business and investments, was initially held in 1998 to increase global visibility, as well as ensure company promotions, collaborations, and revenue generation, but could not be sustained.

However, from July 23 to July 30 this year, the highly anticipated fair will come off on the theme: "Promoting Trade, Tourism, and Investments in the Central Region: Challenges, Prospects, and Solution" at the Adisadel College Park in Cape Coast.

About 500 exhibitors from the region's 22 metropolitan, municipal, and district assemblies will participate in the fair.

The eight-day programme will allow for business opportunities, partnerships, networking, and job development events for indigenes of the region, and attract many others outside the region too.

It will be held along with a two-day business forum, which will bring together creative entrepreneurs, investors, and corporate bodies to find opportunities and solutions for their mutual benefit.

At the launch of activities in the run-up to the fair in Cape Coast last Thursday, the Central Regional Minister, Justina Marigold Assan, expressed excitement at the return of the Central Expo, stressing that it followed the Regional Development Strategy and Transformational Agenda to increase awareness of the Central Region in trade, tourism, and investment.

She said the event would aid in the development of productive relationships, businesses and networking across the region and beyond.

"Our dream is to stimulate economic activity in the region and beyond, harness parts of the economic potentials and focus on promoting domestic agro-business, tourism, and above all attract private sector investment to the region," she said.

Mrs Assan urged the chief executives of the various assemblies to take keen interest in the programme by organising the exhibitors in their districts and also designing flyers on possible investment areas and other opportunities to make the public aware of the potentials of their areas.

She said this would strengthen the drive for the local economic development programme, and urged stakeholders to support the efforts to achieve a successful fair, adding that the success of this initiative depended on the unflinching support and sponsorship for the activities by all the stakeholders.

The President of the Central Regional House of Chiefs and Paramount Chief of the Breman Asikuma Traditional Area, Odeefuo Amoakwa Buadu VIII, appealed to chiefs in the region to make trouble-free and litigation-free lands available for businesses and development projects.

He said this would attract investors and businesses to the region, allowing for growth and development.

He warned that if suitable lands remained in dispute, investors would flee the region and that this would increase poverty levels.

He stressed that a healthy business environment required litigation-free lands to allow investors to visit the region freely and gladly to tap into its huge economic potential.

"If we are looking at changing the narrative in the region and getting businesses to invest in our region, the chiefs must ensure that there are problem-free lands available for these businesses to come in to drive the development agenda," he added.

Odeefou Buadu stated that if the region wanted to make a new reputation for itself and change the narrative, it would need to take a collective and collaborative effort from all duty bearers and residents to see the agenda through, and urged all to get to work.

"The desire to see a new Central Region, an industrial revolution and a business environment that gives the youth confidence in their businesses is on the shoulders of duty bearers," he said.

He added that institutions charged with overseeing the region's development must work together and live up to their responsibilities.

He noted: "if we want a region that would no longer be dubbed as poor, we must harness the resources we have been endowed with to give the youth confidence to even start up something on their own and get the relevant source of livelihood”.

The Omanhen of the Oguaa Traditional Area, Osabarimba Kwesi Atta II, lauded the concept as a practical way of bringing the region up to speed towards development and called on all key stakeholders in the region for support to ensure the event's success.

"Remarks about the region have not been fair," he said, adding that "it is incumbent on everyone to support and make the expo a success in order to shift the narrative."

The Diocesan Bishop of Cape Coast of the Anglican Church, Rt Rev. Dr Victor Reginald Atta-Baffoe, said the church was willing to completely commit to the cause and ensure that the faithful in the region participated actively in the event to ensure its success.

He emphasised that the programme was a means of re-establishing and restoring nature and economic activities in the region, adding that it deserved the complete cooperation of all stakeholders.

"The more we promote tourism, the closer we get to nature and the more we tend to be thankful to God and the creator of the universe, and the economic aspect of it is very important too," he stated.