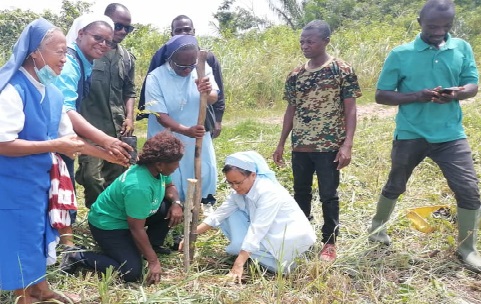 The sisters planting a seedling during the exercise Follow @Graphicgh

The Mission Congregation of the Servants of the Holy Spirit (SSpS), a Catholic women’s society, has marked its 75th-anniversary celebration with the planting of trees at Samsam in the Eastern Region.

The tree planting exercise, which was carried out ahead of the nationwide Green Ghana project, was in support of the government’s effort to improve the vegetation cover across the country.

Over six hundred trees of five different species — teak, cassia, mahogany, coconut and cashew — were provided by the Amasaman Forestry Commission for the exercise.

The SSpS, an international women religious congregation of the Catholic Church, has contributed to the socio-economic growth of the country.

Some of the important institutions the group has founded include St Mary’s Senior High School at Korle Gonno, St Theresa School at Kaneshie and Christ the King School, Cantonments, all in Accra.

The SSpS sisters pledged their support to any initiative of government geared towards making the country eco-friendly.

The nuns believe that it is the responsibility of every one to join hands in restoring the earth to its original green state.

The District Manager of the Amasaman Forestry Commission, George Osei, explained that it was only trees that could effectively absorb carbon dioxide in the air, adding that one important response to the climate change issue was tree planting.

The Chief Ranger of the Amasaman Forestry District, Janet Boateng, announced that 25 million tree-seedlings were being planted in the Greater Accra alone this year for the Green Ghana project, dubbed "Mobilising for a Greener Future".

The seedlings, she noted, had been given to stakeholders, schools, institutions, churches and individuals who would supervise the growth of those seedlings and replace those that were dying.