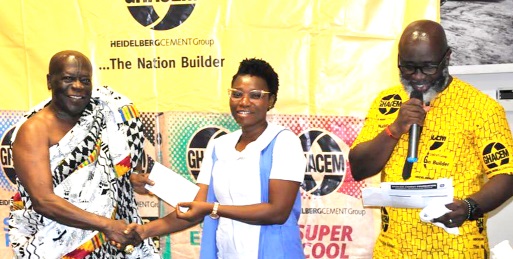 Ehunabobrim Prah Agyensaim VI (left) presenting a cement allocation chit to a representative of a beneficiary health facility. With them is Benny Fiifi Ashun, the Head of the Ghacem Cement Foundation Secretariat Follow @Graphicgh

The Ghacem Cement Foundation has donated 14,000 bags of Ghacem-branded cement to selected health and educational institutions in the southern sector.

It is in fulfilment of a pledge to support deprived communities with free cement for the construction or refurbishment of health and educational infrastructure.

The donation was the first of the 2022 Ghacem Cement Foundation donation ceremonies.

The foundation was established in 2002 as part of Ghacem Limited's corporate social responsibility to assist deprived communities to improve their health and educational infrastructure.

The northern sector event is scheduled for Kumasi on June 30, 2022.

At the donation ceremony in Cape Coast, the Paramount Chief of Assin Kushea of the Owirenkyi Traditional Area and Chairman of the foundation, Ehunabobrim Prah Agyensaim VI, commended the beneficiaries for being good ambassadors in Ghacem’s quest to support the development of the country through the cement foundation and gave an assurance that the foundation would continue to be transparent to ensure the right projects were supported to drive the course.

He, however, expressed worry that although there was equity in the distribution of the cement, some regions continued to present low requests.

This, he said, tended to slow the pace of public physical infrastructural development in those areas.

He, therefore, urged leaders and stakeholders in the various regions to show interest and assist the relevant institutions to apply.

The Works Manager, Takoradi, of Ghacem Limited, Eric Odoom, noted that Ghacem was always delighted to give back to society as part of its corporate social responsibility.

Ghacem, he assured, would continue to produce quality and relevant cement products on the market as a contribution to sustaining high standards in the local built industry.

A council member of the foundation, Prof. Audrey Gadzekpo, said the secretariat of the foundation believed in helping those who helped themselves “especially deprived communities who deserve better infrastructure”.