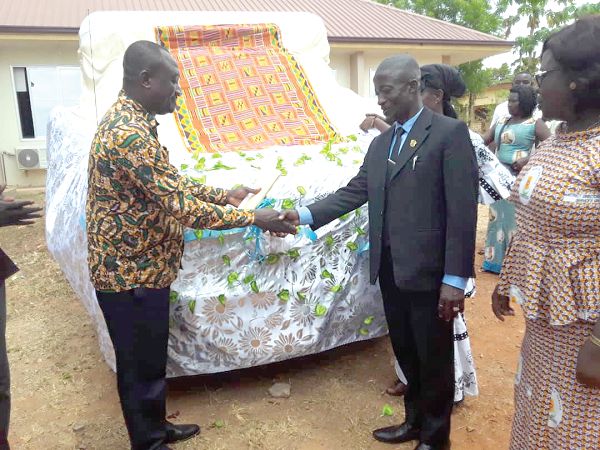 A Ghanaian Chartered Accountant based in Toronto, Canada, Mr Ohene Amoako, has presented an ambulance worth US$30,000.00 to the 152-bed Saint Mary’s Hospital at Drobo in the Jaman South Municipality in the Bono Region.

The ambulance will be used to convey patients who have been referred to other health facilities free of charge but the hospital has arranged that the patients will be charged GHC2.00 to be put in a pool to cater for the operational cost of the ambulance.

Presenting the vehicle to the hospital, a brother of the donor, Mr Gabriel Kyeremeh, explained that even though Mr Amoako considered a lot of options, it was finally agreed that the ambulance could help prevent avoidable deaths caused by the non-availability of an ambulance to convey referred patients to bigger health facilities.

According to Mr Kyeremeh, the donation to the hospital, which serves as the Jaman South District Hospital, was meant to pay back what was invested in Mr Amoako, who was born and spent his formative years in the area.

He appealed to citizens of the municipality residing in cities across the country and outside Ghana to combine their resources to assist the various communities in the provision of social amenities such as potable water, hospital equipment and school buildings to help improve the living standards of the people.

For his part, the Medical Director of the hospital, Dr Enoch Dagoe, bemoaned the lack of adequate equipment in all the departments of the hospital and called on the citizens to emulate the donor’s gesture by coming to the aid of the hospital in order to save the lives of their own family members.

“It is unfortunate that there is no functional incubator for the 13-bed Neonatal Intensive Care Unit of the hospital and thus we always have to refer neonates to other hospitals,” Dr Dagoe said, explaining that in January and February alone the hospital had 15 neonatal cases.

In addition, Dr Dagoe expressed concern about the obsolete radiology equipment which broke down frequently, inadequate staff and accommodation and called on the Ministry of Health to come to the aid of the hospital to enable it to serve the people better.

The Administrator of the hospital, Reverend Father Philip Sae, explained that the hospital had to spend a total of GHC42,339.40 for the clearance of the ambulance from the port and other expenses, and called on the Jaman South Municipal Assembly to assist with the payment of such expenses.

In his address, the Minicipal Chief Executive for Jaman South, Alhaji Abuu, said Mr Amoako’s donation was timely and would make an indelible impression on the minds of the people in the municipality.

He said it was an undeniable fact that the numerous health challenges facing developing countries could not be fully addressed by the government or its agencies alone.

Alhaji Abuu said the hospital was established through a partnership between the government and the Catholic Church and bemoaned the current dwindling communal spirit with many Ghanaians refusing to sacrifice for the development of their own communities.

He said the assembly had provided CHPS facilities at Dwenem and Abuokrom while similar facilities were at various stages of completion at Miremano, Batiaa, Taino No 2.