Both cans are genuine - Malta Guinness

Guinness Ghana Breweries Limited (GGBL) has responded to a viral post on Facebook questioning the authenticity of its popular beverage, Malta Guinness. According to the beverage manufacturers, both cans are genuine and the difference in branding is because they were produced in Nigeria and Togo respectively.

Several Facebook users had tagged the company in posts regarding the authenticity of the cans, questioning whether they were consuming the right product.

However, GGBL says there is no cause for alarm as both products are safe to drink. 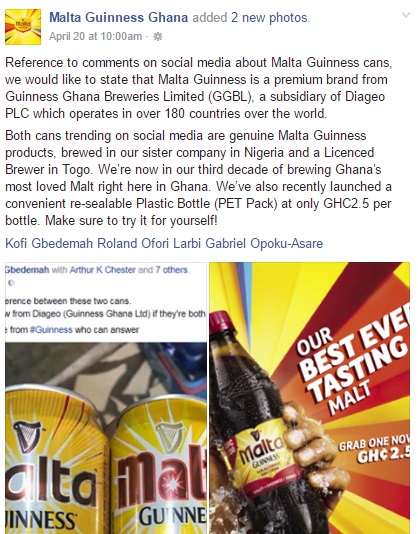 Below is the entire statement from GGBL

Reference to comments on social media about Malta Guinness cans, we would like to state that Malta Guinness is a premium brand from Guinness Ghana Breweries Limited (GGBL), a subsidiary of Diageo PLC which operates in over 180 countries over the world.

Both cans trending on social media are genuine Malta Guinness products, brewed in our sister company in Nigeria and a Licenced Brewer in Togo. We’re now in our third decade of brewing Ghana’s most loved Malt right here in Ghana. We’ve also recently launched a convenient re-sealable Plastic Bottle (PET Pack) at only GHC2.5 per bottle. Make sure to try it for yourself!