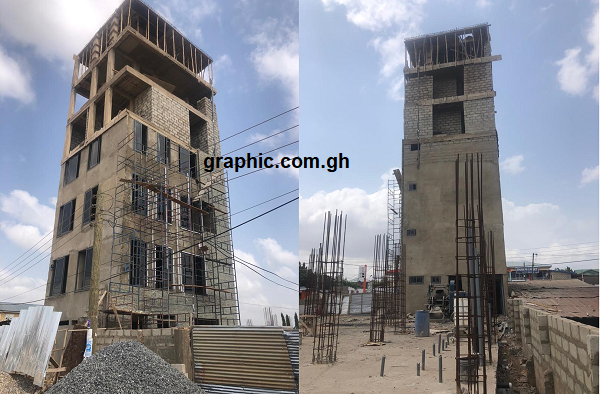 The Adentan Municipal Assembly has assured that it will soon remove a multi-storey structure at the Ashaley Botwe School junction because the developer does not have a building permit.

The Assembly in a press release said it has not received any application or documentation for a permit to put up the six-storey structure.

The assembly added that the developer has failed to heed its directives to stop the construction despite multiple attempts by its Municipal Assembly's Works Engineer to stop him.

The release did not disclose the identity of the developer but said it has also ignored two 'Stop Work' notices.

"The Adentan Municipal Assembly Works Engineer and his team have visited the site several times to stop him but all have not yielded any positive results," the statement said.

"Stop work notices were served to the developer, on the 22 of June 2020, 4 of August 2020, while the Assembly undertook the necessary steps to work with the relevant state agencies for their assessment and recommendations before proceeding to demolish the property or otherwise. This was to ensure that the Assembly keep its commitment to act fairly and reasonably in the protection of the public in all cases".

"Finally, on the 29 of September 2020, the developer was formally written to, to cease all on-going construction works on-site and proceed to take necessary steps in demolishing the structure. The Adentan Municipal Assembly is taking all needed steps and liaising with the relevant state agencies, to assess and ensure the safe removal of the structure with immediate effect".

The release assured that "within the shortest possible time an action would be taken on the building to ensure safety within the area".

On social media, those arguing that there was nothing wrong with the project concludes that you cannot determine a structural integrity of a project by a mere look at a video or a picture.

They have therefore called for structural engineers to examine it and conclude whether it was safe or not.

Others however have argued that, there was everything wrong with a mere look of the project.

He said the EPA had not given a permit for the project  and was not sure whether other agencies with such responsibilities have also given permit for it.

He consequently asked that the owner of the building to visit the office of the EPA with the necessary documentation covering the project.

Watch a video of the building below