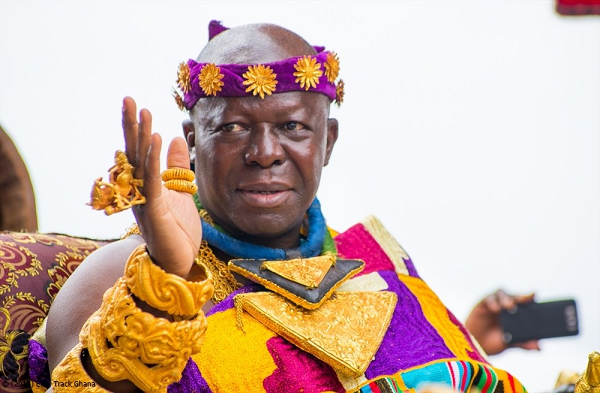 The Asantehene, Otumfuo Osei Tutu II, has described as alarming, the current rate of deforestation in the country, estimated at 10 million hectares per year.

He said available statistics indicated that Ghana had one of the highest deforestation rates in Africa and the world, at two per cent per annum, on the average losing 135,000 hectares of forest per year as of 2020.

The development, he said, called for a concerted effort by stakeholders to address the situation, stressing that the managers of the country’s natural resources should up their game and help restore Ghana’s forest cover.

Otumfuo made the call in a speech read on his behalf by the Asakyirehene, Nana Mensah Bonsu, during the 40th anniversary celebration of the Faculty of Renewable Natural Resources (FRNR), College of Agriculture and Natural Resources (CANR) of the Kwame Nkrumah University of Science and Technology (KNUST).

The event was held at the Great Hall last Saturday, October 1, 2022.


A number of dignitaries and stakeholders in the natural resources and environment industry, including the Minister of Lands and Natural Resources, Samuel Abu Jinapor, graced the occasion.

One of the highlights of the event was the unveiling of a proposed 300-seater computer laboratory being executed by the alumni of the faculty in support of their 40th anniversary celebration.

Mr Abu Jinapor and the Asakyirehene jointly cut the tape to unveil the proposed project.

Otumfuo, who doubles as the Chancellor of the KNUST, observed that with many rural and peri-urban residents relying on forest products, the forest and natural resources had come under attack for people’s survival.

“With the dependency of rural and peri-urban dwellers on forest products, the challenge of over-exploitation and the spread of agriculture has become one of the factors causing the depletion of our natural resources,” he indicated.

He, therefore, rallied support for eco-system-based programmes intended to enhance the ecology, such as the ones by groups, including FORM Ghana and Miroforestry, to see to the planting of over 15 million trees each year.

“This is critical in reclaiming our lost forest cover,” he remarked, and urged the government to provide the enabling environment for the initiatives to be sustained.

He acknowledged the tremendous progresses made by the FRNR for training over 6,000 graduates and postgraduate natural resources managers - who continued to play various roles in forestry, wildlife, fisheries and water management globally.

Mr Abu Jinapor, speaking on the theme: “40 Years of Training Natural Resources Managers: A New Age for A New Focus,” said the theme was absolutely apt and timely.

He said as an educational and research institution, the faculty must take a lead role in educating the general population and local communities on the roles and responsibilities in the management of these natural resources.

He admitted that the government had a greater responsibility for their sustainable management through the promotion of relevant policies and laws.

“This new age with its challenges presents us with the opportunity to take stock, re-strategise and adopt new or additional measures for the efficient, effective and sustainable management of our natural resources,” Mr Abu Jinapor emphasised.

The minister also commended the KNUST for being part of history by planting 2,000 trees in commemoration of the Green Ghana Day initiated by the government.

“Let’s continue to support the initiative to restore the lost forest cover of our country and come to grips with the climate crises,” the minister appealed.

Chiefs not to be blamed

Meanwhile, Otumfuo Osei Tutu II, at a different forum, has said that chiefs cannot be accused of allowing illegal mining to thrive when licences are issued without recourse to traditional authorities.

He also questioned the failure of the security agencies to successfully fight illegal mining in the country.

Welcoming the US Ambassador, Virginia E. Palmer, to Manhyia, the Asantehene acknowledged the economic drivers for illegal mining operations, but said that should not supersede the environmental devastation.

He blamed leadership of Ghana for failing to tackle galamsey.

“In Ghana, chiefs don’t issue permits and licences for mining. Those are issued from Accra and it is done without consulting the chiefs.

“The law says the state holds the land in trust for the people and so determines those things. How can a chief supervise when he has no control over the licence and who should mine and how it should be done?

“At the district level, we have the political administration – the district chief executive and the security council. Are they all saying that they are unaware of the activities of these galamseyers?” Otumfuo questioned.

The Asantehene emphasised that if the political leaders could not stop illegal miners from operating, then they were not up to the task of leading.

“If they are unable to detect and stop the operation of these galamseyers then they are unworthy to be there, it is as simple as that,” he stressed.

According to the National Forest Plantation Development Programme, approximately less than one per cent of forest cover remained outside of the forest reserves, much of which was in small, scattered patches, swamps and sacred grooves.

Over the years, some measures have been instituted to improve the nation’s environment, including the creation of some 120,000 hectares of forest planting in 2007 by the Forestry Commission.

This, however, fall short of the general commitment needed on the part of the citizenry in tackling the current high rate of deforestation in the country, some environmentalists have argued.