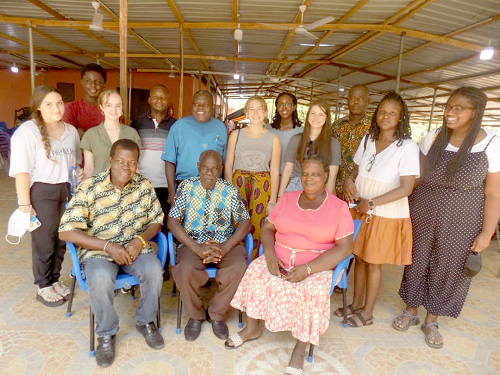 Seven students of the School of International Training (SIT), a private graduate institution in Brattleboro, USA, have visited the Odopee Herbal Healing Centre at Mankessim in the Central Region to acquaint themselves with the operations of the centre.

The students, all females, are in country as part of their summer programme to study traditional medicine and health care systems in the country.

They visited the centre last Tuesday accompanied by the Academic Director of the school’s summer programme, Dr Nat Quansah, and two lecturers of the University of Ghana, Dr Thelma Ohene Agyei of the Pharmacy Department and Mr Akwasi Atta of the School of Languages.

Dr Quansah said the students heard of the eye healing prowess of the Odopee Herbal Healing Centre through the online portal of the Graphic stable, www.graphic.com.gh, and decided to visit the centre to see things for themselves.

The students will spend six weeks in the country.

Dr Quansah said the summer programme was originally scheduled for Madagascar, but due to the severity of the COVID-19 pandemic in that country, it was shifted to Ghana.

The Americans interacted with a number of the eye patients and also listened to the testimonies of more than 20 of those who were said to have regained their sight at the centre.

Among the cases, the visiting team seemed enthralled by the case of a three-year-old girl who was said to have been cured of full blindness.

The little girl now guides some of the eye patients at the centre to visit the washroom.

The students described the healing prowess of the proprietor of the centre, Mr John Kofi Sackey, as unique.

They said Mr Sackey’s therapy, which was devoid of lotions or some other applications on the eyes of patients or even having to drink any concoctions, were surprising.

They promised that on their return home, they would impress upon more Americans with serious eye problems, especially those with glaucoma, which defies orthodox medical treatment, to visit the Odopee Herbal Healing Centre for treatment.

They further gave the assurance that they would impress upon some American investors and donors to go to the aid of the centre to enable it to render more assistance to humanity.

They, however, appealed to the Ghana government, non-governmental organisations and well-to-do individuals to provide logistical support such as vehicles and a hostel for the centre.

Mr Sackey said the only people who had offered support to the centre were the former Central Regional Minister, Mr Kwamena Duncan, and the current MP for Mfantseman, Mrs Ophelia Mensah-Hayford, who donated GH₵2,000 and GH₵1,000 respectively.

Mr Sackey treats eye patients free of charge, and explained that God gave him the gift of healing in a vision after a week’s fasting, and warned him that he would lose the potency of the healing prowess if he charged for treatment.

Mr Sackey said it took between one week and one year for an eye patient to be healed depending on the seriousness of the diseases.

He said since the Daily Graphic broke the news about his healing prowess on December 6, 2019, more than 2,000 eye patients, including foreigners, had regained their sight at the centre.