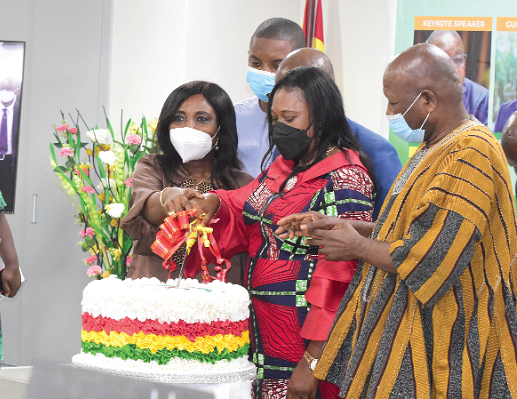 The fifth anniversary of the birth of the Greater Accra Regional Hospital (GARH), formerly known as the Ridge Hospital, was held in Accra yesterday.

The anniversary was held on the theme: "Delivering Cutting Edge Healthcare Services since May, 2017."

Starting as a hospital for the European expatriates in 1928, it became a district hospital after Ghana’s independence in 1957 and was later designated as Ridge Regional Hospital in 1997.

The hospital was redeveloped and transformed into an ultra-modern 420-bed capacity facility with the full complement of specialist services to provide cutting-edge medical services to the people of Ghana and beyond.

The redevelopment, which started in 2013, was completed in 2016, while operationalisation was in May 2017.

Among the services provided by the hospital are Surgery, Medicine, Obstetrics and Gynaecology, Newborn and Paediatrics, Accident & Emergency, Radiology and Pharmacy.

The event brought together personalities such as a Deputy Minister of Health, Mr Mahama Asei Seini; the Greater Accra Regional Director of Health, Dr Charity Sarpong, and other top officials in the health sector.

At the anniversary ceremony, the Medical Director of the GARH, Dr Emmanuel Srofenyoh, said the hospital was on course to become a health tourism destination in Ghana and beyond in the next few years.

In that regard, he said there had been strategic moves to build the capacity of the hospital’s human resource and improve on its specialist facilities to deliver cutting-edge health services.

Dr Srofenyoh said the focus was to equip the hospital with the needed resources and infrastructure to take advantage of the opportunities that the African Continental Free Trade Area (AfCFTA) had for the health sector.

Dr Srofenyoh said although the new GARH had been operationalised, the facility had undergone a major transformation of its physical and operational capacity that could be leveraged to provide relevant healthcare services to members of the public.

He said apart from the establishment of the Paediatric Oncology Centre, the hospital had specialists such as cardiologists, endocrinologists and diabetes specialists, general surgical specialists, neurosurgeons, urologists, obstetricians, intensive care specialists, and trauma and orthopedic specialists who provide specialised services to patients.

The medical director mentioned other key achievements as the establishment of Bone Marrow Transplantation Centre,  Dialysis Centre,  Family Medicine and Wellness Centre, and the construction of additional laboratory units.

In terms of certification, Dr Srofenyoh said the GARH had received accreditation for Obstetric and Gynecology, Surgery, Internal Medicine and Paediatrics departments for postgraduate training.

Additionally, he said the hospital had been accredited by the Health Facilities Regulatory Agency (HeFRA), thereby elevating the hospital to a tertiary status.

"Greater Accra is now the only region whose regional hospital is a tertiary facility, and this is refreshing," he said.

In terms of management, he said the implementation of a Functional and Central Emergency System (FCES) had made the GARH a major destination for emergency referrals in the city.

Dr Srofenyoh also said the GARH had an effective bed management bureau (BMB) with an appointment of a bed coordinator to address the "no bed syndrome."

He said the hospital had achieved a high bed occupancy rate of over 75 per cent on the average "which is among the highest in the country."

Touching on innovation, he said the facility had deployed WhatsApp technology to coordinate maternal and newborn referral processes in the Greater Accra Region.

"We have the busiest delivery centre within the Ghana Health Service and the third busiest in the country after Korle Bu and Komfo Anokye Teaching hospitals," he said.

In his speech, Mr Seini commended the management of the GARH for putting in strategic measures to transform the hospital into a world-class referral health facility.

He described the theme for the fifth anniversary as apt because it was in line with the government's quest to provide universal health coverage with the view to living no one behind in terms of access to quality health care.

The deputy minister said the government was determined to complete all ongoing health projects across the country as part of measures to provide equitable access to health care for all citizens.

He also said the government would make good its agenda to build a district hospital for 88 districts that did not have those facilities.

Turning his attention to COVID-19, Mr Seini called on all members of the public to adhere strictly to the safety protocol.

While commending the GARH and other stakeholders for the pivotal roles they played in the fight against the pandemic, he stated: "Ghana is not out of the woods yet, so we need to keep our guard."

As a result of that, he said the government would continue to put in place measures to protect people against the pandemic.

For her part, Dr Sarpong said GARH had so far demonstrated competence in the delivery of health services.

She said the fifth anniversary must be a period to reflect on the way forward to consolidate the gains and justify the investments in the facility.

While admitting that the achievements of GARH within the five years made the fifth anniversary worth celebrating, he added that more needed to be done if the dream of being a destination for health tourism was to be realisedgen.