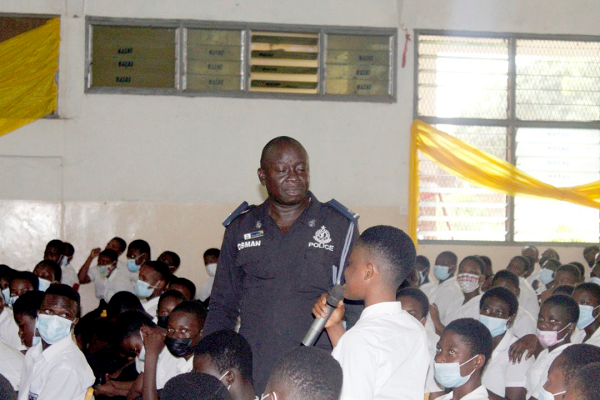 Mr Osman Alhassan interacting with some of the students

The Adentan District Police Command has embarked on a sensitisation campaign to educate students and other social groups in its jurisdiction against the abuse of drugs.

The campaign was led by the District Police Commander, Superintendent of Police (Supt) Osman Alhassan, and a lecturer of the University of Ghana Law School, Dr Emmanuel K. Hopeson.

More than 2,800 students, teachers and non-teaching staff of the West Africa Senior High School (WASS) benefited from the public education which addressed the laws governing the use of narcotics in Ghana and common abusive substances such as cocaine, heroine, marijuana and tramadol.

They were also taken through violent crimes, among others which were directly or indirectly caused by the misuse of drugs.

Mr Alhassan bemoaned the recent arrests of students in police-led swoops and raids of ghettos within the Adentan district.

The sensitisation campaign, he said, was a preventive approach to help the students guard themselves against the harmful consequences of drugs.

He said violent vices such as rioting, school vandalism and assault on teachers were tendencies induced by the usage of narcotics.

Mr Alhassan said some members of the public concealed such harmful substances in consumable products such as toffees, tea and alcohol, and sold or gave them to unsuspecting students.

He warned that users and dealers in narcotics risked jail terms if found.

Dr Hopeson entreated students to desist from engaging in narcotic abuse and other drug-related activities.

He encouraged students and parents to seek support from the Centre for Peace and Reconciliation when they experienced drug-related challenges.

The institute, he said, had professionals, expertise, tools and resources for professional counselling in dealing with associated challenges to guarantee excellence in their academic endeavours.

The headmistress of the school, Dr Mrs Shine Ofori, expressed gratitude to the police administration, the Adentan District Police Command and Dr Hopeson for the education and called for more of such programmes.