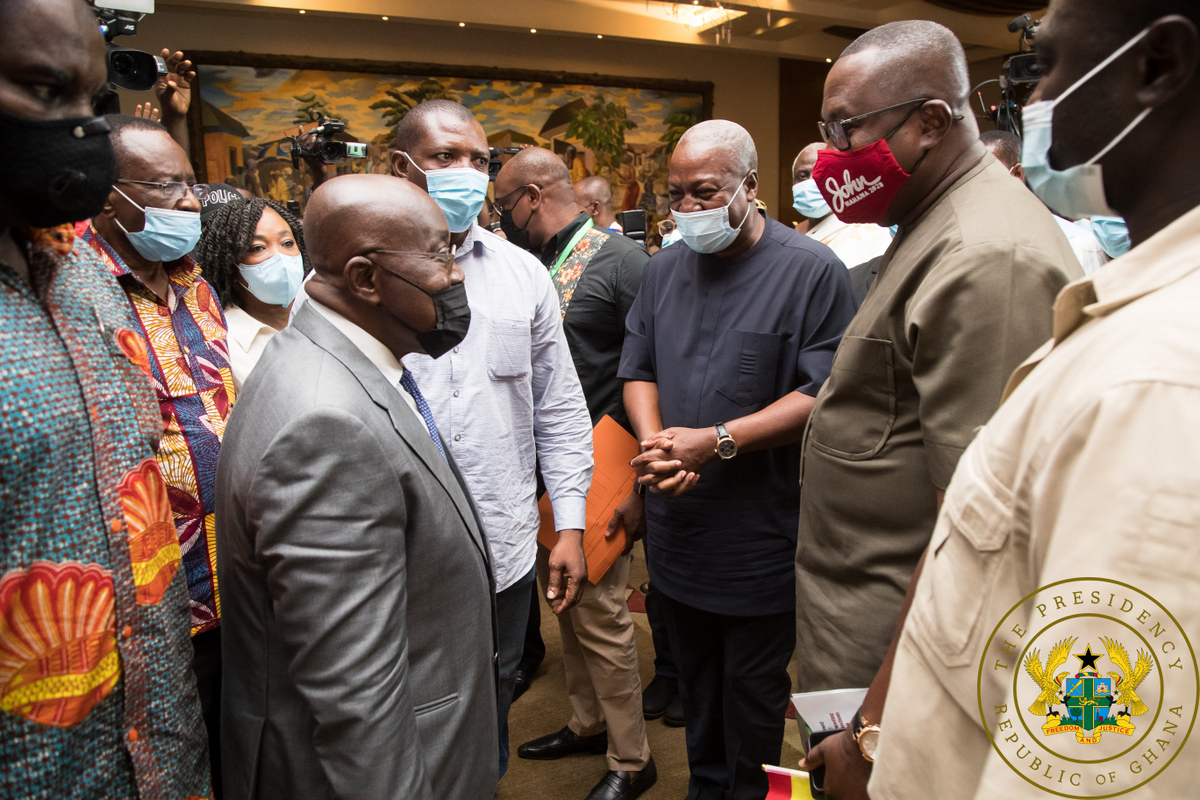 The signing on Friday December 4, 2020 is to commit them and their supporters to non-violence, resort to judicial process to seek redress in case of disputes and work towards eradicating vigilantism.

It was witnessed by the Chairman of the National Peace Council (NPC), Reverend Dr. Ernest Adu-Gyamfi, President of the National House of Chiefs, Ogyeahohuo Yaw Gyebi II and the Executive Director of the Institute for Democratic Governance (IDEG), Dr. Emmanuel O. Akwetey.

The Chief Justice, Kwasi Anin-Yeboah, presented copies of the Manual on election Adjudication in Ghana, Fourth Edition (Nov 2020), aimed at addressing electoral issues that might arise from the December 7 Presidential and Parliamentary Elections to the presidential candidates, .

The Third High Level Meeting of the PEPP 2020 was convened by the Office of the National Chief Imam, the NPC, the National House of Chiefs and IDEG.

The media partners for the programme were Graphic Communications Group Limited (GCGL) and the Ghana Broadcasting Corporation (GBC).

It was on the theme “Eradicating Electoral Violence in Ghana’s Democracy: The Role of Political Leadership.

President Akufo-Addo speaking at the ceremony reiterated the party’s commitment to ensure peace during and after the elections.

He pledged to accept the verdict of the people of Ghana saying that their primary consideration was the peace, unity and the safety of the country.

He called on the security agencies to ensure that the atmosphere in the country was conducive, under a fair and transparent electoral process.

He expressed his confidence in the Electoral Commission to conduct a fair and transparent election.

The President, however, noted that media outlets that report false news should be condemned by all, noting that such deliberate malice heightened unnecessary tension.

Mr. Mahama also expressed his commitment to ensure a peaceful election, but noted that the recent events such as the Ayawaso West Wuogon violence has given many anxious moments of doubt about the government’s ability to deliver a peaceful violence free election.

He said despite such past incidents the public has risen to the occasion and have delivered a peaceful election.

The Chairman of the NPC, Rev. Dr. Adu-Gyamfi, speaking at the meeting, noted that ensuring a peaceful election was a collective responsibility, involving Civil Society Organisation and the public and not just the responsibility of the Electoral Commission.

He said the Council’s partnership with stakeholders has resulted in the passage of the Vigilante and Related Offences Act, 2019 (Act 999) and the subsequent adoption of the code of conduct and road map against vigilante violence by the National Peace Council (NPC).

He expressed the hope that the signing of the pact will not just be a public display, but that the parties would genuinely play their roles in ensuring peace during and after the 2020 general election.

Rev. Dr. Adu-Gyamfi urged political parties to avoid creating platforms that will create violence, while behaving responsibly in their utterances in public and private.

“This will ensure that neither their supporters or opponents are agitated or motivated in any way to resort to violence,” he said.

The Chairperson of the Electoral Commission, Mrs. Jean Mensa and the Director-General of Administration at the Ghana Police Service, Commissioner of Police (COP) Mr George Akuffo Dampare, gave assurances that the necessary materials and security personnel needed to conduct a peaceful election have been instituted.

The National Chief Imam, Sheikh Osman Nuhu Sharubutu, in a keynote address, urged the signatories to ask for God’s grace to ensure peace in the country.

He expressed the belief that President Akufo-Addo and Mr. Mahama were righteous leaders and would not let anything bad happen in the country.

He urged them to avoid bad utterances, noting that the country had conducted seven peaceful elections and thus asked them to do same for the 2020 elections.

The Special Representative of the Secretary-General of the United Nations for West Africa and the Sahel, Dr. Mohammed Ibn Chambas, also speaking at the meeting reiterated the call for peace during and after the election.

The meeting was attended by the former President of Liberia, Ms. Ellen Johnson, high Profile delegation from the European Union, United Nations, and diplomats.

In 2012, the first PEPP was signed in Kumasi, dubbed: “Declaration against electoral violence, impunity and injustice”, which was subsequently renamed the Kumasi Peace Pact.

The second PEPP was signed in Accra in 2016 on the theme: “Strengthening Ghana’s democratic stability, peace and unity”.

That PEPP provided a platform for the political parties and their presidential candidates to re-affirm their commitment to the Kumasi Peace Pact and promote the adoption of a road map to sustain post-election political dialogue and consensus on strategic reforms vital to strengthening Ghana’s democratic stability, peace and unity.