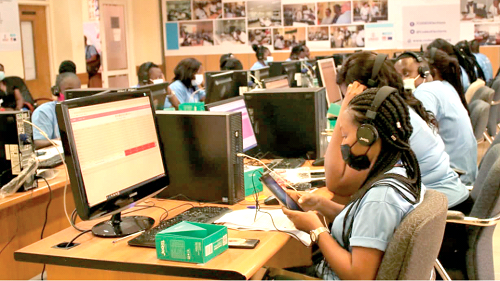 A National Information Centre (NIC) to serve as an operational base for Parallel Voting Tabulation (PVT) for the Coalition of Domestic Election Observers (CODEO) has been opened in Accra.

The temporary centre being hosted by the Kofi Annan International Peacekeeping Training Centre (KAIPTC) will provide a central coordinating point for collaboration with stakeholders, as well as provide tracking of election-related incidents.

Representatives of the EC, development partners, the national election security taskforce, National Peace Council, as well as members of the diplomatic corps attended the event.

The PVT, officials of CODEO say, can enhance the confidence in the electoral process as it will help deter manipulations or mistakes particularly during the tabulation of results.

It is also aimed at enhancing transparency in the process by providing more timely, precise and representative information on the conduct of voting and counting.

Officials of CODEO and their partners also hope to use the process to undertake independent verification of accuracy, particularly in relation to the presidential results to be declared by the EC.

At a ceremony to open the facility, the US Ambassador to Ghana, Ms Stephanie Sullivan, indicated that the strong example of democracy provided by Ghana to the rest of Africa was shown in the considerable strides the country had made in preserving the rule of law and safeguarding peaceful processes.

That notwithstanding, the ambassador pointed out that for the upcoming general election to be successful, stakeholders ought to foster an environment that respected the law and allowed for free and unfettered access of individual rights to vote.

“A serious threat to democracy anywhere in the world is the threat of electoral violence which can create an environment of fear and reverse the clock of progress,” Ms Sullivan said.

She added that political ambition should not be allowed to tear down the progress that had been built for generations.

Ms Sullivan also called on the media to act responsibly, having in mind that their actions were a key part of a transparent and fair electoral process.

The UK High Commissioner to Ghana, Mr Iain Walker, for his part said while the election was for the Ghanaian people to elect who they wished to be their leader for the next four years, the UK government was determined to lend support to Civil Society Organisations (CSOs) in making sure the processes were fair.

“We have so far funded the Star Ghana Foundation and also supported CODEO to engage some 1,700 observers for the elections and we believe as partners of Ghana, it is important to deepen democracy on which the country’s prosperity and development are hinged,” Mr Walker said.

Ghanaians, the High Commissioner said, wanted peaceful, transparent, inclusive and fair elections and it was the hope of the UK government that such a feat would be achieved “and we genuinely look forward to participating in the next chapter of the country’s democracy”.

The Head of Cooperation at the European Union, Mr Zoltan Agai, sharing an insight also pointed out that Ghana’s democracy had a good record in Africa and ought to be consolidated.

The Deputy Chairperson of the EC, Dr Siriboe Quarcoe, in his remarks said free and fair elections were the responsibility of all stakeholders who ought to help in making the process as transparent as Ghanaians wished it to be.

“We are hoping for a peaceful process which we cannot achieve without the collaboration of stakeholders, and our hope is that we will get the needed cooperation to ensure successful polls,” he said.

Out of the number, Sheik Shaibu said 1,500 would take part in PVT and submit regular update reports which would be analysed and the findings shared with key stakeholders and the general public.

The Executive Director of the National Peace Council, Mr George Amoh, also said the council had undertaken a lot of sensitisation activities, particularly in 100 of the potential violent hot spots identified by the police and remained optimistic that Ghanaians would adhere to protocol and regulations that would promote a peaceful process.