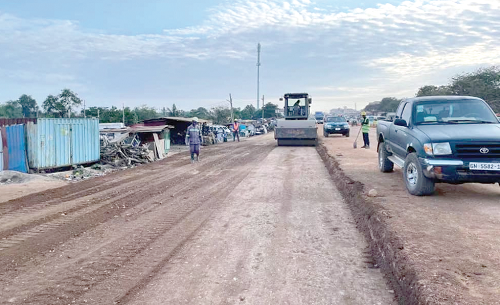 Road surfacing work on a portion of the stretch Follow @Graphicgh

Contractors working on phase one of the Accra-Tema Beach Road reconstruction are optimistic that the project will be completed on schedule, despite the delay in the relocation of utility lines and the demolition of structures within the construction path.

Work on the 16-kilometre project, which starts from the Independence Arch of the Black Star Square in Accra through Osu, La and Teshie to Nungua, is being undertaken by China Ganzu International Corporation for Economic and Technical Cooperation (CGICETC).

Currently, the single carriageway is taking shape as a dual carriageway.

Ongoing works include the construction of a bridge — which has reached the power foundation level — at the A-Life Junction at Teshie, necessitating road diversions in the area.

The 26.6-km project is estimated at $100 million, with China Railway Major Bridge Engineering Group Company Limited (CRMBEGCL) being the other contractor.

Known as the Beach Road Expansion Project - Phase One, it is expected to be completed by December next year to serve as a major alternative route to the Accra-Tema Motorway.

The scope of work includes a two-way, four-lane urban road, traffic signal system and related auxiliary works, as well as a three-tier interchange at the Nungua Barrier.

The Administrator at the CGICETC, Ms Tracy Tao, said the project had been divided into three sections, with Section One spanning Nungua to Teshie and sections Two and Three starting from Teshie to La and La to the Black Star Square, respectively.

She revealed that Section One of the project, which was more than 30 per cent complete, was expected to be completed by the end of the year.

She indicated that Section One had had to contend with the relocation of some electricity and water lines, as well as the the removal of some underground fuel tanks of some fuel stations along the stretch.

Ms Tao indicated that the construction firm was awaiting a clearance permit to have the fuel tanks removed and expressed optimism that the project would be completed within schedule.

She said there were no immediate plans to demolish buildings along the stretch, adding that the company had received active cooperation from the local people and various government agencies, including the Department of Urban Roads.

A commercial bus driver, Mr Adjetey Annang, said the ongoing works had come as a big relief, stressing that it was already easing traffic and travelling time on the road.

"I am of the hope that this will not be one of the many projects that start speedily and halt along the way," he said.

In August last year, the Vice-President, Dr Mahamudu Bawumia, cut the sod for the reconstruction of the Accra-Tema Beach Road.