A December to Remember: Beaches back to life 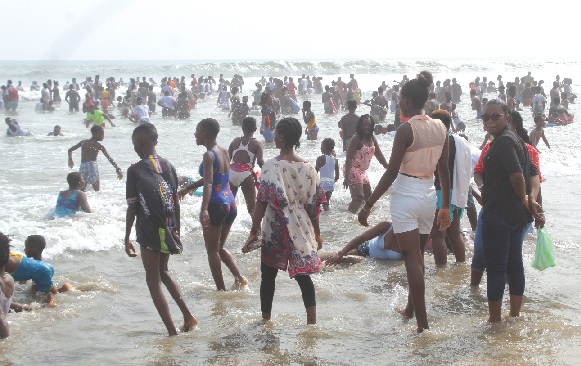 After almost two years of being closed down, the country’s beaches witnessed high patronage as people thronged there to usher in the New Year with parties and other recreational activities.

Since April 2020, the beaches had been closed down due to the outbreak of the COVID-19 pandemic and beach revellers who had been denied their enjoyment, turned up in their numbers as if to make up for the lost times.

Activities such as horse riding, barbecue, all-terrain vehicle rides on the sandy shores, musical jams, took place along major beaches in Accra and Tema from the night of December 31 through to January 2, as people from all walks of life far and near gathered to revel.

Children were not left out as bouncy castles were mounted at some of the beaches for amusement and entertainment.

The Daily Graphic team visited some of the beaches in Accra, Tema, Sakumono in the Greater Accra Region and Cape Coast in the Central Region to observe the mood at the beaches.

Apart from the beaches, various streets and event centres also reverberated with a lineup of events for both citizens and expatriates who had come to celebrate the festive season in the country to choose from.

As part of efforts to attract more tourists to Ghana, with the Tourism Authority christening the festivities ‘December in Ghana,’ there were several activities from December 24 to January 2, when the holidays ended.

Almost all the events attracted high patronage, and these included Afrochella and Afronation switched to full gear as USA’s Meek Mill, Nigeria’s Davido, Asake joined by the legendary duo P-Square, to thrill fans.

Overly excited fans at the Independence Square had their fun cut short as organisers of Afro Nation ended the show abruptly due to the huge crowd beyond their control.

Also featuring the long list of events was the Night of 1029 Laughs which was a good blend of stand-up comedy and music.

It featured comedians from the UK, Series 13 of Britain’s Got Talent finalists and Kojo Anim; from Nigeria Bovi and Kenny Blaq; and from Ghana Lekzy De Comic, OB Amponsah and Funny Face.

Takoradi was not left out as it also witnessed the Ankos Festival, now called the Westside Carnival.

Held from 24 to 26 December, it hosted masqueraders from over 30 masquerade groups.

The Kabfam Legends Night held on Sunday January 1, 2023 at the Accra International Conference Centre featured the Lumba Brothers, made up of Nana Acheampong and Charles K. Fosu (Daddy Lumba).

Christians were not left out of the fun as celebrated gospel musician, Joe Mettle held his annual Christmas concert at the First Love Church, Legon, on Sunday, December 25.

Dubbed “Christmas with Joe Mettle & The Love Gift,” the multi-award-winning Ghana-based Gospel singer and songwriter performed renditions of songs from his extensive and renowned songs, fully backed by The Love Gift Band.

As early as 11:00 a.m. on Monday, January 2, 2023, revellers had massed up at various entry points for tickets at the La Pleasure Beach Resort, the Laboma beaches and the Polo Beach Club, the new entrant into the recreational tourism sub-sector.

This resulted in a gridlock on the La-Teshie road as more cars headed towards the beach.

The Daily Graphic observed that most of the revellers came in groups as commercial vehicle operators also cashed in on the numbers to boost sales.

At the Laboma Beach, which has become famous for family gatherings, the mini canopies mounted for revellers were all occupied as of 12 noon as youth-led groups, families and couples made their way to the beach for the fun-filled activities that were lined up for the day.

The setup for fun activities such as a high live band was also underway with tunes from the various event centres at the beach.

Unlike previous years, two staff of both beaches confirmed to the Daily Graphic that the beaches recorded zero-incident of drowning.

They added that the high patronage was as a result of the full lifting of COVID-19 restrictions on the beaches.

General Manager in charge of Corporate Affairs at the Laboma Beach, Jeffery Tetteh, explained that the beach sold over 10,000 tickets on January 1, 2022 as fun activities dragged late into the night.

The Laboma Beach, he said, had become the ultimate destination for families and small groups to relax.

A staff of the La Pleasure Beach Resort, Aban Nunoo, who spoke to the Daily Graphic, said traders were also satisfied with the huge patronage.

He added that despite the huge numbers, no theft cases were recorded as compared to previous years.

The fun was not only in Accra as the beaches in the Central and Western regions also enjoyed good patronage.

At the Heritage, Hutchland, Da Breeze and Shabu beaches in Cape Coast, families and friends turned up in their numbers to have fun.

Most of the beaches were bursting with a lot of fun activities and loud music as holidaymakers trooped there to enjoy with friends and family.

Some of the holidaymakers the team spoke to said although the economy was tough on everyone last year, it was important to relax and release stress.

One holidaymaker who gave his name as Paa Kwesi said the previous year was a difficult one for him and he needed to release the stress and spend time with friends and family.

Another patron who gave his name as Sammy also said he had come to the beach to release stress and spend time with some of his good friends.

At the Heritage Beach, patrons were seen relaxing, eating and drinking with friends and family while enjoying the cool breeze.

The Chief Executive Officer of Heritage Beach, Emmanuel Ebo Sarbah, said although the patronage was high it could not compare to previous holidays.

"At the beginning of last year, because the Independence Day celebration and other national holidays were held in Cape Coast, we recorded a lot of patronage. It is not bad but it could be better," he said.

The supervisor of the beach said despite the hardships in the the previous year , the beach recorded very high patronage.

"We have made sales more than we made last year and it's obvious as people keep trooping in. We are hopeful that this year things will get better and we will record even higher patronage," he said.

The Supervisor at Hutchland Beach, Vincent Marcoli Marcus Ahinful, said although they recorded high patronage, most people brought in their own food and drinks which slowed down their business a little.

"Although people are coming, they are not really buying what we have here and you know we don't do ticketing so it's a bit difficult, but all in all business is going well," he said.