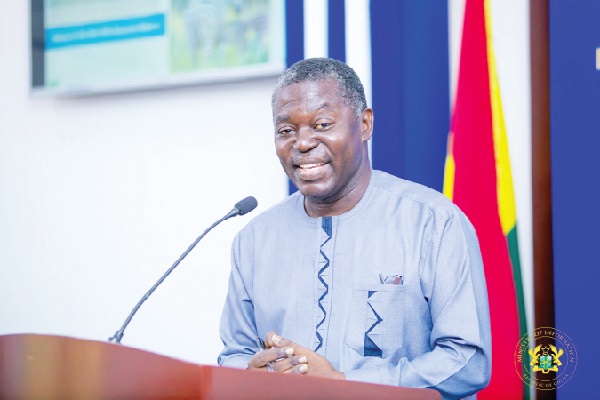 Independent investigations by the National Investigations Bureau (NIB) have revealed that 85 per cent of the trees planted this year as part of the Green Ghana project have survived.

The Ministry of Lands and Natural Resources rallied other stakeholders to undertake the Green Ghana project, an initiative meant to revamp degraded lands and restore the country’s lost green environment.

As part of the project, over seven million tree seedlings were planted at various locations across the country on June 11, 2021.

Speaking at the Meet-the-Press series in Accra yesterday, the Deputy Minister of Lands and Natural Resources in charge of Forestry, Mr Benito Owusu-Bio, disclosed that a report presented by the NIB showed that 7,193,424 seedlings were distributed to the 16 regions, out of which 6,603,298 were verified as having been planted, and 85 per cent of the trees had survived.

"The NIB did its private investigations on the status of the seedlings planted on the Green Ghana Day on June 11, 2021, and I can say that the findings are favourable because 85 per cent survived.

“In afforestation, 85 per cent survival rate is very good, and we are motivated by this report," he said.

Mr Owusu-Bio said the findings by the NIB confirmed the results of the field work that the Lands Ministry and the Forestry Commission (FC) had done on the survival rate of the seedlings.

While commending all stakeholders, including the FC, the Ghana Education Service (GES) and traditional leaders, for supporting the project, the deputy minister said more needed to be done to restore the country's degraded vegetation.

To ensure that the project was successful, he called on other partners to contribute towards the afforestation drive.

For his part, the Chief Executive Officer (CEO) of the FC, Mr John Allotey, said the commission would, from next year, implement a robust programme meant to restore and preserve the country's forest cover.

He said the afforestation programme had been presented to the Cabinet for approval.

"The programme has been put before Parliament, so we are waiting for approval, so that we can put out the details. But I can say that when it is approved, it is going to improve the forest landscape of our country; and by so doing improve our food production," he said.

Mr Allotey added that the FC had worked with other stakeholders, such as the Kwame Nkrumah University of Science and Technology (KNUST), the Forest Research Institute (FRI) of the Council for Scientific and Industrial Research (CSIR) and other international collaborators, to develop a modern map of Ghana’s forestry sector.

He added that through that initiative, it had been established that Ghana’s forest area currently stood at 6.57 million hectares.

"This has been reported to the United Nations Framework Convention on Climate Change, and it has been accepted," he said.

Mr Allotey said the FC was also working with other state agencies to help curb irresponsible human activities, such as illegal mining and indiscriminate logging, that were major causes of deforestation.

Again, he said, the commission was working with the Lands Ministry to roll out a benefit-sharing system for those who planted trees.

He also said the commission had started a pilot registration exercise for all trees on farms.

"So if you have trees on your farm, it is good because we are going to register those trees and you will benefit from them when they are harvested," Mr Allotey said.