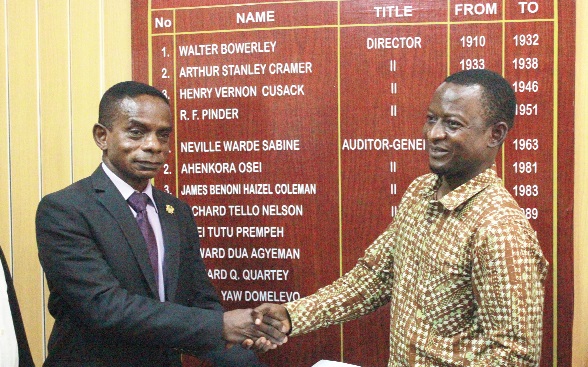 Mr Johnson A. Asiedu (left), the Auditor-General, handing over documents to Mr Paul Abanga, one of the contractors, during the ceremony. Picture: ERNEST KODZI Follow @Graphicgh

The Ghana Audit Service has signed separate contracts with eight local companies to construct 16 district and three regional offices for the service.

The projects, estimated at €13 million and expected to be completed between nine and 12 months, are being financed with a loan secured by the government from the German Development Bank, KfW.

Per the arrangement, €1 million of the loan facility will be used for consultancy services, while the remaining €12 million will cover the actual cost of construction.

The Auditor-General, Mr Johnson Akuamoah Asiedu, said the construction of the buildings would help improve the work of the service across the country and make its reports more independent.

He explained that out of the 275 districts in the country, the service was present in only 76 of them.

“Even with the 76, many of the structures are not for the service but the local assemblies, and that is not good for our independence. So the construction of these buildings will go a long way to improve on our work,” he said.

The three regional offices will be constructed in Ho, Koforidua and Cape Coast.

The Auditor-General said already, the KfW had agreed to provide an extra €11 million facility to construct offices for the service in the six newly created regions.

“This loan was secured three years ago and was to be put to use by now, but because of some technical bottlenecks, the project stalled, and due to that we are unable to construct the initial 25 buildings with the facility and had to reduce the number to 19.

“But as we speak now, we have a signal from the facility provider that it is willing to give us an extra €11 million to complete what we originally planned for,” Mr Akuamoah Asiedu said.

The Chairman of the Ghana Audit Service Board, Professor Edward Dua-Agyeman, told the Daily Graphic in an interview after the contracts had been signed that that was the first time in the history of the service when 19 buildings were being constructed at the same time.

He said the office buildings were important for the work of auditors, as they required privacy and independence to execute their mandate, without any outside influence.

Without privacy, Prof. Dua-Agyeman said, the work of auditors could be compromised, and that would be a disservice for the country.