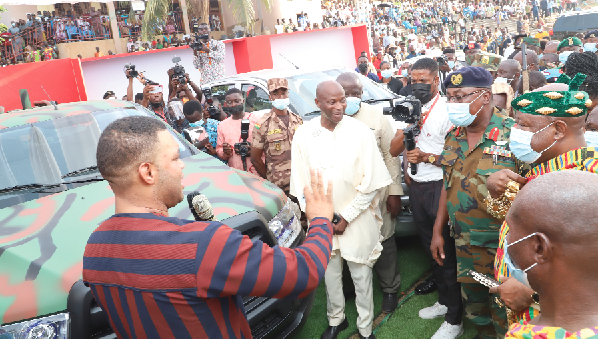 Mr Kwadwo Safo Jnr.(left) explaining a point about a vehicle to Brigadier General Michael Amoah-Ayisi (3rd right), Chief Staff Officer at the Army Headquarters of the Ghana Armed Forces and other officials at the event­ in Accra. Picture: GABRIEL AHIABOR
30.5k Shares

The 40th anniversary of the Kristo Asafo Tech Exhibition was marked in Accra last Sunday.

The event, on the theme: "Positioning the church in nation-building — Solving societal problems through religion, science and technology," saw the display of some vehicles and equipment manufactured by the group over the last 40 years.

Kantanka Automobile also presented a pick-up vehicle to the Ghana Armed Forces (GAF) to support them in their activities.

The event was witnessed by some members of academia, industry players, entrepreneurs, members of the church and the public.

The Chief Executive Officer (CEO) of the Kantanka Group of Companies, Mr. Kwadwo Safo Jr, said the company's definition of transformational mindset began with the belief that people could achieve anything they set their minds to.

He said the company was proud of how far it had come, using science and technology to help build the country and the continent.

Mr. Safo Jr said the vision of the company was to employ problem-solving technology in its operations, a vision which he said would be pursued aggressively.

"Our vision is to build a technology research hub in the sub-region," the CEO said.

Mr. Safo extended an invitation to universities, polytechnics and technical institutions that were willing to partner the Kristo Asafo Group, especially in the area of research, to come on board.

"From 2021, the exhibition shall be branded the Kantanka Ghana Tech Expo. It will be opened to all inventors across the continent who are interested in the use of technology to solve African challenges," he said.

The Omanhene of the Kumawu Traditional Area, Barima Safo Tweneboah Kodua, appealed to the government to increase its patronage of Kantanka vehicles to enable the company to expand and create more jobs for the youth.

He said the government could put a system in place through which groups, such as teachers, nurses, among others, would procure the vehicles on a hire -purchase basis.

"I am impressed with what Apostle Safo has done. I am so happy about it and I think the government needs to support him through every means possible," he added.

According to him, Africans were also bestowed with knowledge and creativity to manufacture things, adding that being Black did not mean a person was daft.

The Vice-Chancellor of the University of Health and Allied Sciences, Professor John Gyapon, said the relationship between the church and science was gradually eroding.

He said the church was an agent of development, for which reason there was the need to bridge the gap between the church and science.

He said the role of the church in development could be seen in the high number of schools and hospitals it had constructed across the country.

He said what Kristo Asafo was doing in terms of using technology to transform the nation was something that was worthy of emulation.

Prof. Gyapon, therefore, charged churches that were running universities to invest in technology in the training of their students.

The Founder of the Kristo Asafo Church, Apostle Kwadwo Safo, expressed appreciation to the leadership and members of the group for their hard work, dedication and commitment to the work of the church and the company over the years.