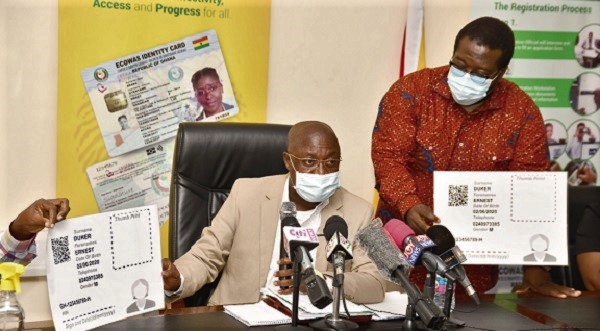 The National Identification Authority (NIA) has detected 32,756 suspected cases of multiple registration in the ongoing registration exercise in violation of a law that requires each eligible citizen to be issued with a card.

The Executive Secretary of the NIA, Professor Kenneth A. Attafuah, who disclosed this at a press briefing in Accra yesterday, said the authority would begin investigations into the matter and those found culpable would be prosecuted.

"The NIA has a board which comprises heads of key state institutions and security agencies such as the Social Security and National Insurance Trust (SSNIT), the National Health Insurance Authority (NHIA), the Births and Deaths Registry, the Ghana Immigration Service (GIS), the Ghana Statistical Service and three other members.

“The board will look at these double registrants on a case by case basis and when it is estimated that there are fraudulent motives behind their action, prosecutions will be done," he added.

The event was organised to provide updates on the activities of the NIA over the past one year and the way forward as the authority resumes the registration exercise in the Eastern Region today.

Providing highlights on the activities of the NIA, Prof. Attafuah said the authority had registered 11,063,259 eligible Ghanaians as of the time the exercise was discontinued in the Eastern Region.

He added that the authority had so far printed 11,034,174 cards since the exercise began last year and issued 9,050,346 to qualified citizens.

Prof. Attafuah said there were also 350 cases of eligibility of some persons suspected to be foreigners that were being challenged across the country.

He said with the registration exercise nearing completion, the NIA would set up District Review Committees (DRCs) to look into specific cases and make appropriate recommendations.

"In addition, the NIA has withheld the Ghana cards of some applicants because the personal identification numbers (PIN) indicate that they had previously been registered in the national identity register as foreigners, but attempted to register for the Ghana card as Ghanaians without showing evidence of acquiring a Ghanaian citizenship.

"People in this category will be required to provide evidence to establish that they have subsequently acquired Ghanaian citizenship," the executive secretary said.

He further denied claims that the authority was deliberately printing multiple cards to people, saying “there are 525 incidences where multiple cards have been printed with the same PIN. This was caused by a system update which has been resolved. Only one card can be active against a set of biometrics such as face, fingers and iris”.

On the coronavirus disease (COVID-19) protocols, Prof. Attafuah urged people to wear nose masks when going to register: “We are saying that no mask, no registration,” he emphasised.