Ayawaso Assembly has not stopped John Dumelo from dredging activities 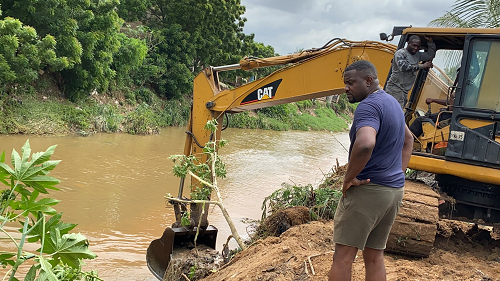 The Ayawaso West Municipal Assembly in the Greater Accra Region says it has not stopped Mr John Dumelo, an aspiring Member of Parliament for the Ayawaso West Wuogon Constituency from carrying out dredging activities in the municipality.

Mr Dumelo, who is contesting the Ayawaso West Wuogon Constituency seat in the upcoming 2020 general elections on the ticket of the National Democratic Congress (NDC) is reported to have been stopped by the assembly following his decision to dredge some drainage systems in the area.

The community in West Legon complained to me about flooding and I decided to help by deploying excavators to dredge the drains there. After 3 continuous days of dredging the site, Ayawaso West Municipal Assembly has ordered me to stop but I still Dey 4 my people. #wemove #idey4u pic.twitter.com/kfZBI991x0

However, a statement issued and signed by the Municipal Chief Executive (MCE) of the area, Madam Sandra Owusu-Ahinkorah, said the purported report suggesting that the assembly has stopped Mr Dumelo was false.

“It is unfortunate that people will for whatever reason put a spin on an invitation we made to Mr. Dumelo as a Stop notice,” she said, adding “We want to put it on record that the said report is false.”

Our attention has been drawn to media reports that the Ayawaso West Municipal Assembly has stopped Mr. John Dumelo from carrying out dredging activities in the municipality.

We want to put it on record that the said report is FALSE.

It is unfortunate that people will for whatever reason put a spin on an invitation we made to Mr. Dumelo as a Stop notice.

Whilst it is true that my outfit invited him for a meeting with the Municipal Urban Roads and Workers Directors, it was to encourage him to liase appropriately with departments at the Assembly for effective supervision.

The Assembly is doing its best in tackling the numerous challenges facing the municipality, individuals can take care of some challenges if it posses a nuisance to them. The Local Government Act also requires that if a persons activities will pose a problem to the public the Assembly should intervene.

In the case regarding Mr. Dumelo, he is dredging a major storm drain that links Ayawaso West and Okai Kwei North Municipalities. Such works are carried out under the supervision of experts such as Municipal, Highway and or Hydro Engineers. Mr. Dumelo is undertaking this exercise without these experts.

Dredging is a major activity that requires expert advice from the Environmental Protection Agency (EPA) and other agencies of state.

We therefore invited him to draw his attention to these facts and to encourage him to seek assistance from the Municipality as required by law.

The Municipal Assembly will support all private efforts aimed at community development regardless of motive.

The public is therefore called upon to disregard the falsehood and the mischief the publication sought to create.