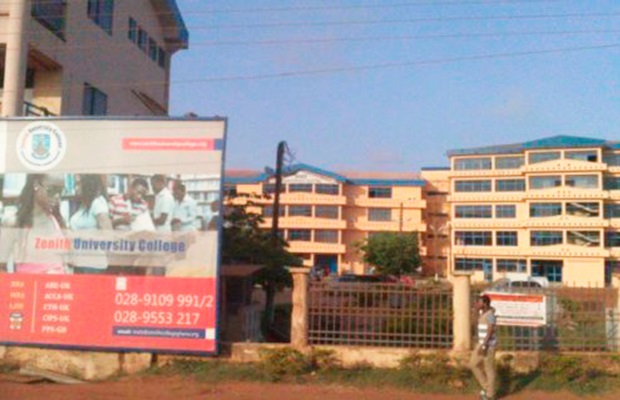 The front view of the campus of Zenith University College in Accra
30.5k Shares

About 200 past students of the Zenith University College (ZUC) are up in arms against authorities of the school, demanding what they described as their final result slips and certificates.

The former students have accused their alma mater of hiding behind their affiliation with the University of Cape Coast (UCC) to unduly delay their result slips and certificates for two years, a charge the mentor university has discredited.

According to the students, all attempts to get the school authorities to release and present those relevant documents to them had proved futile, alleging that ZUC had blamed UCC for the delay.

This development is currently brewing anger among the affected past students who completed in September 2019 and July 2020.

Impact of the delay

Some of the students who spoke to the Daily Graphic said the delay in the release of the certificate had denied them employment opportunities.

“From July last year when we completed school, our results haven’t been uploaded to the school’s student online portal nor have our certificates been presented to us.

“The school is not giving us any tangible explanation other than blaming its affiliate for the delays, and this, I think, is unfair because I have met all the obligations required as a student, and so I do not understand why the school is still keeping my certificate,” one student said.

Due to the delay, one of the students indicated that he had missed an opportunity to participate in the 2021 enlistment exercise of the Ghana Armed Forces (GAF).

“This opportunity might be missed for good because next year I exceed the minimum requirement age to enter the GAF”.

Another student said she was currently looking for a job but without her certificate, no firm was ready to employ her.

She said her situation was no different from her other colleagues who had become a burden on their parents after two years of completing school.

The immediate past President of the Students Representative Council (SRC) at ZUC, Mr Emmanuel Kisseih Apodeih, confirmed the development, stating that he was also a victim.

Based on a personal assessment of the situation, he said the delay could be attributed to a litany of challenges summarised in the failure of most students to submit their project work on time which ended up delaying an assessment by the school’s affiliate, UCC.

He said another contributory factor was the inability of some of the students to clear their arrears on time, thereby delaying the process of the year group.

However, Mr Apodeih added that he was aware of an ongoing process to ensure that the 2019 group would graduate by the end of this month.

Several attempts to get the school authorities to respond to the accusations proved futile as the Registrar, Dr Padikuor Madjitey, who earlier agreed to speak to the paper on Monday, February 8, 2021, has since not responded to the Daily Graphic’s calls to her phone.

However, investigations by the paper showed that on Wednesday, February 10 this year, ZUC released results of the affected students onto its online student portal, three days after the paper contacted Dr Madjitey on the issue.

Further enquiries revealed that the delay in the release of results and certificates of students had become commonplace in the school, with continuing and past students testifying to the frequent occurrences.

Some of the students said it took a minimum of two to three years before a semester’s result could be released on the school’s online portal.

The Director of Public Affairs at UCC, Major Kofi Baah-Bentum (retd), told the Daily Graphic last Monday that ZUC was yet to meet the standards and criteria under the college’s affiliation with UCC to enable the affected students to graduate.

He said UCC could, therefore, not be blamed for the delay in the release of the results or the certificates.

Mr Baah-Bentum explained that under the affiliation, results were supposed to be made available for UCC to audit before certificates were issued, but “up to today, ZUC is yet to submit them”.

To show readiness, he said, an audit team from UCC visited ZUC two weeks ago in order to understand and fast-track the process for the affected students to graduate, but to their surprise, the school was still not ready to submit the necessary documentation for audit.

“During the visit by the UCC audit team, we learnt that some of the lecturers for all this while have not submitted results of the students for them to be audited.

“UCC is ready to issue the certificates, but as we speak ZUC has not met the criteria, and we cannot issue certificates in a vacuum,” he said.

He added that the Academic Registrar of ZUC had officially been informed about the development, and was said to have given an assurance that measures were in place to address the situation.