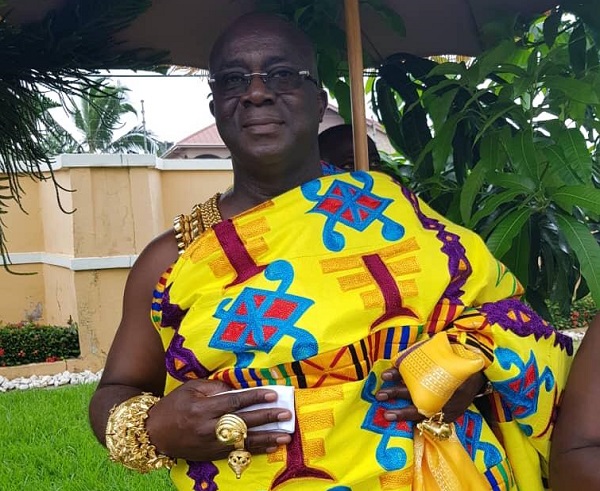 Nana Agyenim Boateng I, the Chief of Amoaman in the Atwima Nwabiagya District in the Ashanti Kingdom will next month be decorated with an Honorary Doctorate Degree in Kumasi by the George Fox University in Newberg, OR, USA.

The Traditional Ruler’s immense contribution to the socio-economic development of the country drew the attention of Rectitude International Mission (RIM) and World Diplomatic Federation (WODIF). These prestigious institutions recommended the Nana Agyenim Boateng I, known in private life as Mr. George Kwadwo Boateng for the award of an Honorary Doctorate Degree.

The Chief Executive Chancellor, WODIF, His Meritorious Eminence Reverend Dr Christian Kwetey Kweitsu explaining the criteria for Nana Agyenim Boateng I nomination, pointed out that it was based on the traditional ruler's social and administrative activities in providing social interventions, business and society.

About Nana Agyenim Boateng I

Nana Agyenim Boateng I having worked in his formative years at the Produce Buying Company, now known as PBC Limited, contributed immensely to the general transformation of the company when he assumed office as the Deputy Managing Director.

He further disclosed that Nana Agyenim Boateng I moved from PBC Ltd in 1998 to Global Haulage Group as CEO. He returned to PBC in 2006 as Deputy Managing Director (Operations)/DCEO where he assisted in reducing the Company's debt. In his tenure at PBC Ltd, the company rose to become number one in the Ghana Club 100 for two consecutive years - 2010 and 2011 and again placed second in 2012.

On the traditional landscape, since his Majesty Otumfuo Osei Tutu II enstooled him, he has been able to dutifully perform numerous developmental assignments on behalf of the Asantehene/Government.

Notable among these projects is acting as the liaison for His Majesty on projects between the King and the government like the Kumasi Kejetia and Central Markets as well as the Komfo Anokye Hospital reconstruction, the Kumasi Airport and the new phase of the Central Market all being undertaken by Contracta Engenharia from Brazil and Contracta Construction UK. Ltd. These projects have expanded the city’s infrastructural base and the nation at large.

At Amoaman, his first year of enstoolment saw the building of a crèche to JHS classroom block with the support and collaboration of friends and organizations. These initiatives were in support of the Otumfuo Asantehene Educational Fund. The Amoanhene also demarcated the lands in Amoaman for projects like Police and Fire Stations, CHIPS compound, Market, Lorry station and access roads to all parts of the community which has become great relief for his people

“With all these qualities, it is no gainsaying that he has been able to distinguish himself as an outstanding personality with exemplary leadership qualities. Having done a background check on his person through interactions with diverse people, who confirmed and justified his exemplary attributes. This is a privilege for us therefore to award him with the Honorary Doctorate Degree,” said the Chief Executive Chancellor, WODIF.