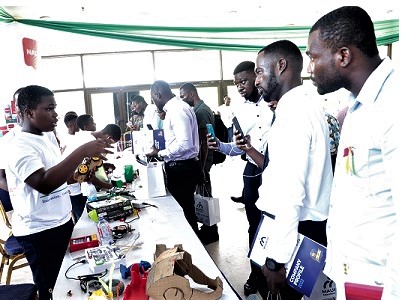 Some learners taking participants through the Stemrobo Program after the event. Picture: EDNA SALVO-KOTEY Follow @Graphicgh

The Indian High Commissioner to Ghana, Sugandh Rajaram, has underscored the importance of innovation and creativity in nation-building and development.

He said it was important that as a nation, “we take advantage of the younger generation by infusing the spirit of innovation into their minds which will revolutionalise the country and speed the development process”.

Mr Rajaram said inculcating creativity and innovation into young minds was a very important aspect of India’s cooperation with Ghana, adding that India was willing to share what they had in terms of technology with other countries, especially with countries in Africa.

He mentioned that there was a need to train young people to be job creators and not job seekers, adding that the only way that was possible was to be abreast of technology and STEM-based tuition.

"We should not only understand the importance of technology but learn new ways to address the challenges of tomorrow", he added.

He made the statement at the launch of the StemRobo Tinkercode programme organised by the Maurya Education Limited in Accra last Wednesday.

The StemRobo Tinkercode programme, a combination of science, technology, engineering, mathematics (STEM) and robotics seeks to awaken creativity and innovation in the area of STEM among children.

The programme will begin in August 13 and 14 at the Pentecost Convention Centre at Kasoa where children will be camped and trained in using STEM and Robotics to solve practical life challenges.

The launch also saw the award of the International Grading Exam (IGE) citation of accreditation to 36 private schools.

The IGE is a standardised testing system that provides valuable feedback on the company’s Universal Concept of Mental Arithmetic (UCMAS) programme.

The Director for Business Development for Maurya Education Limited, Roger Ohemeng, said to compliment the government's efforts in promoting STEM education in the country, their outfit put together the programme to help unleash creativity in children, especially those in the private schools.

He said the programme was mainly targeted at school children who might not have access to the STEM centres opened in the country.