Back to school in midst of COVID-19 outbreak 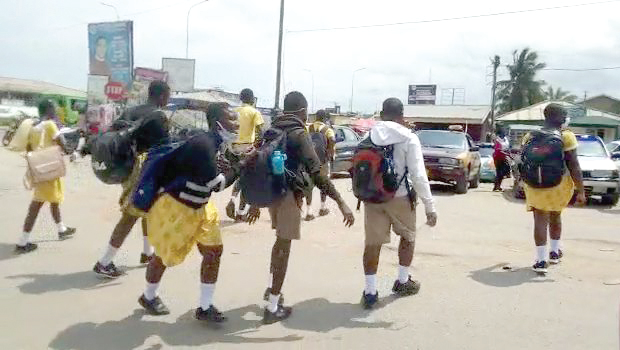 Social distancing is totally ignored by these students
30.5k Shares

It is 7 a.m. on a Monday morning, Miss Rebecca Dede Amankwa, a final year Senior High student is on her way to the exams centre but the usual gait of the bubbly young girl writing her exit examination is gone.

Her steps are slower as she heads to the centre. The 20-year old wears a face mask —vher new armour — against the virulent disease, which has infected at least 178 of her peers.

Reports of COVID-19 in at least 13 senior high schools (SHSs), have increased her fear of a possible outbreak in her school, Ngleshie Amanfro SHS in the Ga South Municipality.

Miss Amankwa is one of the 375,737 candidates from 976 public and private SHSs writing the 2020 West African Senior School Certificate Examination (WASSCE).

To protect herself she says, "I keep my mouth and nose mask on religiously, use hand sanitizer or wash my hands regularly and avoid mates who fail to wear masks".

In her school, two hand washing stations (Veronica buckets) are at the entrance for washing of hands, and temperatures are checked before entry into the exams hall. Veronica buckets have been placed at vantage points in the school where students are required to wash their hands on a regular basis.

Yet, the regular hand washing is voluntary and not enforced by any school authority.

Even though the government indicated that class starts at 9a.m. and ends at 1p.m, the situation differs in most schools. At Amankwa’s school, classes start at 9a.m. and end at 3p.m. with 25 students in each class sitting two meters apart. But during recess or in between lessons, this physical distancing is totally ignored as students chat in groups, usually without their masks on.

After school, most students remove the nose mask right outside the school gates probably tired of wearing it for hours and walk close to each other.

Amankwa’s grandmother, Christiana Ninson, felt helpless when the government ordered the reopening of schools. She was extremely worried that Amankwa would be exposed to unnecessary risks but she did not also want her grandchild's future jeopardised.

"We do not have a choice. We can only pray that all goes well", she said.

Some students returning home after school with their face masks off

On July 5, 2020, scores of parents were thrown into a panic when six students at the Accra Girls tested positive for COVID-19.

The situation worsened when the school’s authorities refused parents’ access to their children, claiming the situation was under control. Prior to the reopening of schools, parents were told they would not be allowed to visit their children.

Two weeks later, a total of 55 people out of 314 tested at the school, including a teacher and his wife, contracted the virus.

Angry parents picketed at the school demanding to take their children home but their requests were refused.

Persons who test positive are taken to isolation centres and managed.

A parent, Irene Oppong, said the decision by the school authorities to deny parents’ access to their children was in breach of their rights.

"Why are they preventing us from seeing our children? No parent has been informed of the status of their children. We are unable to sleep or eat. This is an indirect torture," she said.

The National Council of Parents Teacher Association expressing its concern, called for the closure of schools. The association wants all students tested before they are made to return home if negative or isolated if positive.

The Executive Director of Child Rights International, Mr Bright Appiah, said closure of schools should be based on scientific evidence.

Before the reopening of the schools, the Parent-Teacher Associations and School Management Committees said in various statements that the lives of teachers, students and other school workers would be at risk due to the difficulty in maintaining social distance at schools.

A headteacher who spoke on condition of anonymity said schools were facing major budgetary challenges to meet the social distancing requirements demanded in the directives issued by the government.

A Deputy Minister of Health, Dr Bernard Okoe Boye, says cases recorded in schools were either with no symptoms or in mild state.

He argues that “there is absolutely no reason to close down schools because of recorded COVID-19 cases.”

Yet, he says: “A confirmed case anywhere, including SHSs, is a reminder that the virus is around us, hence, the need to take the protocols seriously.”

The GES Spokesperson, Ms Cassandra Twum Ampofo, also said, “it would not be safe to send students home now as it will be easy to test, trace and treat them while in school.”
Reopening strategies from South Africa to Finland to Israel show it is not just about the adjustments a school makes but also about how much virus is circulating in the community.

As the drama and the debate over the decisions, actions and inactions continue, Miss Amankwah has just one wish: “all I want is for all this to be over soon."

This report was supported by the Africa Women Journalism Project (AWJP) in partnership with the International Center for Journalists (ICFJ).